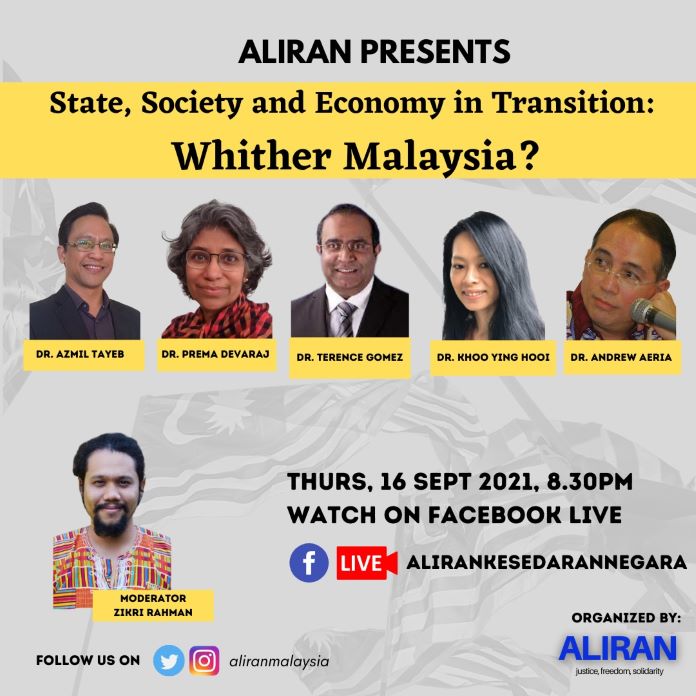 Our speakers, all of them Aliran executive committee or ordinary members, explore what might be the political, social and economic situation in Malaysia in the medium-term, say in five years’ time.

Will the new Umno-led government, headed by the ninth Prime Minister, Ismail Sabri, be able to usher in a more democratic, inclusive and prosperous Malaysia for all?

Our distinguished speakers will situate current problems in the context of several bigger questions.

Assuming the next general election will be held as scheduled in two years’ time, will a new multi-ethnic coalition have consolidated itself to restore stability to Malaysian politics? Or should we anticipate the consolidation of a Malay-Muslim dominant coalition like now? Might the latter not lead towards more polarised inter-ethnic relations and continued instability?

Will the coalition that offers Sabah and Sarawak greater autonomy a bigger share of the development budget have the edge?

Or will multi-ethnic multi-religious cooperation spearheaded by a reformist coalition government emerge? But where might this fresh energy come from?

Economy at a crossroads

To what extent can the current Malaysian economic model, so dependent on foreign direct investments and cheap foreign labour (currently an estimated four to five million), continue to steer Malaysia towards economic growth and employment creation and allow it to compete with its Asean neighbours?

Have we made progress in human resource development so we can seize opportunities in the knowledge-based and IT-driven global and regional economies?

There is no doubt that Malaysian civil society has awakened since Reformasi. We have witnessed the re-emergence of mass-based politics in the streets, epitomised by Bersih, Himpunan Hijau, Hindraf and most recently, the #Lawan youth.

No doubt, ethnic-based and crony-driven Old Politics is still around, not least in the ruling coalition itself! But many new groups in civil society have emerged. These are non-ethnic-based, and, like Aliran, go out of their way to build bridges and cross boundaries.

We also note the emergence of a host of new and young netizens, men and women, from all corners, including from Sabah and Sarawak, who have used social media to reach out to the rakyat.

So, what will be the cumulative contribution of NGOs and civil society organisations towards democratisation and inter-ethnic cooperation? How does this energetic, creative and exciting sector of politics link up to electoral politics and contribute to a better Malaysia?

Come and join us for an exciting and important webinar!

Malaysia’s back to the future

Where to, now, Malaysia?