Dealing with the standard admonition “You do not have the right to speak about my religion” therefore entails having the courage and consistency to insist that when we reject, criticise and condemn certain cultural practices, we are not engaged in religious hate-mongering, says Farish Noor. We cannot allow conservative fundamentalists from any religious community to equate religio-cultural norms and behaviour with the religion itself, for the two are distinct and may even contradict each other.

If I were to tell someone that I don’t like satay, loathe batik shirts and can’t stand keroncong music, does it follow from that that I hate Malay culture in toto? Now, one would have to be deliberately and consciously paralysingly stupid to believe that, by assuming that the rejection of some aspects of normative culture amounts to a total rejection of an entire culture as well. If that is the case with culture, then why can’t we see that the same rule applies to talk of religion as well?

I raise this point because it has become ever so trendy in Malaysia these days to assume that any rejection, critical questioning or even debate over some normative aspects of religious epiphenomena amounts to a total rejection of the religion per se. This arises because of the unscrupulous manner in which some religiously-conservative individuals have erroneously equated the normative aspect of religiosity with the dogmatic aspect of religion in general. The two spheres, however, are distinct and should remain so.

This explains in part why groups such as Malaysia’s Sisters in Islam have been in the limelight for so many years, and why this group of Muslim feminists have been attacked again and again, and accused of being anti-Islamic. The fact, however, is that Sisters in Islam (SIS) has never raised any questions or doubts about Islamic orthodoxy, but rather have questioned the application of Islamic law and the praxis of Muslim norms in the country that go against the spirit of Islamic orthodoxy itself.

READ MORE:  No to ‘vaccine apartheid’

Let me try to address these questions by way of an analogy or two:

Not too long ago during the bad ol’ days of apartheid, we will remember that the practice of racial discrimination in South Africa was justified on both political as well as religious grounds. Conservative Christian fundamentalists sought religious justification for the practice of racial discrimination by selectively quoting biblical scripture and the Old Testament to find sources that would explain, rationalise and justify racial differences. This reminds us of the point argued by the scholar Ebrahim Moosa who once noted that “the danger with religious elites is that they can make religious texts say whatever they want because they have read them and know how to manipulate them”.

Likewise, in North America, there still remain Christian fundamentalist sects that equally fall back on religious scripture to justify their perceptions and understanding of racial difference. For some of these fundamentalists, Africans are not even human beings and are classified as sub-human, according to old Testament accounts of the African race.

Now, in both these instances, we see the practice of discursive manipulation at its most blatant and abusive. The scripture of the Bible is taken out of context, selectively appropriated to justify everything from apartheid to racial profiling. Is this a Christian virtue? Can we say that this is the kernel of Christian humanism and universalism? Obviously not.

Anyone with even the most shallow understanding of Christian scripture will tell you that such abuse of religious scripture is political in nature, and reveals the truly rotten state of apartheid and religiously-inspired racist politics. I do not have to be a practising Christian to see that, and I certainly do not have to be a Christian to point that out. Does a critical rejection of such skewered religiously-inspired racist politics amount to an attack or rejection of Christianity? Certainly not. Nobody is arguing about Christian orthodoxy here, but rather the socio-religious and political praxis of Christians in their daily lives.

On a point of comparison, we can note the same rejection of the abusive cultural practices of the Taliban in Afghanistan , whose abuse of human rights was justified in the name of Islam. The criticism that was levelled against the Taliban then – by both non-Muslims and Muslim scholars like Sheikh al-Qaradawi, et al – was not directed towards Islam, but rather towards the abusive practices of the Taliban themselves. One instance was when Sheikh al-Qaradawi condemned the bombing of the Bamiyan Buddha statues by the Taliban, which he noted went totally against the Islamic injunction against the destruction of all religious sites. So was Sheikh al-Qaradawi attacking Islam when he issued his statement? Were we being anti-Islamic when we condemned the Taliban’s abusive treatment of women and religious minorities in the country?

Dealing with the standard admonition “You do not have the right to speak about my religion” therefore entails having the courage and consistency to insist that when we reject, criticise and condemn certain cultural practices, we are not engaged in religious hate-mongering. We cannot allow conservative fundamentalists from any religious community to equate religio-cultural norms and behaviour with the religion itself, for the two are distinct and may even contradict each other. Just because someone is born a Muslim doesn’t mean that he or she is an immediate expert on Islam; and the same applies to those who are born Christian, Hindu, Buddhist, etc.

If all these religions wish to entertain the notion that they contain universal truths applicable to humanity, then they have to demonstrate their worth and relevance to humanity as a whole as well. So let us not fall into the trap of cultural and religious essentialism, and let us not tolerate the abuse of human rights whenever it comes under the cloak of religiosity. Christian fundamentalists who justified apartheid and the Taliban who justified the destruction of Buddhist temples may have felt that they were doing God’s work on earth, but it takes a sensible and courageous soul to turn the mirror to these extremists and expose them for the hypocrites they were and are. 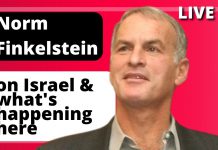 Norman Finkelstein on Israel and what’s happening in the US