Former Malaysian Prime Minister Mahathir Mohamad has scored a historic victory in the country’s general election. He defeated the Barisan Nasional coalition, which has been in power 60 years. The BBC asked some young Malaysian voters what they are now hoping for.

Parlimen Digital and the importance of young voices in politics 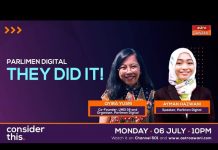 Can the people emerge from Malaysia’s political melancholy?

Yes,he is the man who really gain rakyat respect and trust and hope. We respect his determination and the kick the cash is king out and get back our money,another one is jho low,Chinese don’t like this greedy fatty,get him and his family !You know why I including his family?Because they didn’t tell him that is the rakyat blood money can not do that,that is evil

Because Umno treats Rakyat like pariah and extremely corrupt!

we need his extraordinary mind ……to push the last punch.he is the grand chess master.

Not every politician is clean but he repented and asked for forgiveness. At his age he does not need any material wealth. He’s truly want to save Malaysia and our generations. No one can move the voters, only Tun ..

Because Malaysians young and old were fed up with Corruption, Arrogant Politicians, New Laws stifling our freedom …….and the list goes on and on and on !!!!

Because he is the man who dares to say “SORRY”.

ABOUT US
Aliran is a reform movement in Malaysia promoting justice, freedom and solidarity.
Contact us: [email protected]
FOLLOW US
Content may be reproduced without alteration but please attribute to aliran.com
wpDiscuz
10
0
Would love your thoughts, please comment.x
()
x
| Reply