The severity of the onslaught of the coronavirus is often indicated by the number of new infections and deaths, as well as the dwindling economy and consequent hardships of ordinary Malaysians.

What is less conspicuous – although now is gradually made apparent – is the socially significant fact that both the pandemic and the battered economy have hurt the mental health of many Malaysians.

As we all know, the many lockdowns and their derivatives imposed on the country have wide and deep consequences on businesses, livelihoods and the ordinary people: shuttered shops, loss of jobs, pay cuts, delinquent loans, induced poverty, domestic violence, divorce, loss of self-esteem and despair.

Such a dreary situation has brought about mental stress, trauma and depression among many who are financially vulnerable. There are others who became depressed after many months of confinement to their homes gave rise to a sense of loneliness or isolation and led to family relationships developing to an unbearable level primarily because of economic hardships.

This social context partly explains why a number of people have succumbed to taking their own lives. Suicide rates since the start of the first movement-control order have increased. It was estimated that there were 266 suicides between 18 March and 30 October last year and 336 suicides in the first quarter of this year.

A few of the individuals who died from suicide had incurred losses after having to close shop because of the prolonged lockdowns to the extent that they couldn’t see light at the end of the tunnel.

Shuttered businesses brought about job terminations, which also caused mental stress and depression among workers, with a few jumping from high rises as a perceived way out.

Incidentally, a few disturbing video clips or still photos of such suicides have made their rounds on social media, which is unfortunate as such gruesome deaths should not be for public display. We ought to respect the privacy of their loved ones, if not of the deceased as well.

Disturbed minds from such social backgrounds clearly require counselling from trained counsellors, psychologists and other medical experts to help ease the emotional or psychological pain of the people concerned.

This explains why the psycho-social assistance hotlines of the Ministry of Health Ministry reportedly received 145,173 calls between 25 March last year and 20 May this year, with 85% requiring emotional and counselling support.

In anticipation of increasing mental problems, the ministry reportedly plans to place 200 contract psychological officers to help with mental health patients in all district and government health clinics.

While providing counselling is vital, it is in many ways treating a symptom of a bigger problem: the struggling economy (as a result of the lockdowns) that has unleashed sufferings upon the people, particularly the economically vulnerable.

A few of the video clips that have gone viral may well provide a glimpse of the grim situation on the ground. For example, in extreme desperation, a man was heard in the background appealing tearfully to the King and the Malay rulers for help. The lockdowns have left him with no income to pay for his house and car loans and other financial commitments.

READ MORE:  Banking on compassion and help during lockdown

In another clip, a man openly defied a directive from enforcement officers to not open his roadside stall for business – because he said he needed to make a few ringgit for the day to feed his children.

And more recently, a people’s white flag movement, with the hashtag #benderaputih, has appeared over social media to encourage desperate families to raise a white flag outside their homes so that food and other essentials can be provided without them having to beg for such things. This initiative is also a step to curb suicide.

Another clip, however, took the mickey out of federal ministers who ate a bowl of instant noodles to supposedly indicate their empathy for the destitute.

Against such a dire backdrop, economic stimulus packages from the federal government, such as cash injections aimed at targeted socioeconomic groups, are much needed to help the vulnerable.

As part of the package, an automatic loan moratorium of six months, which has now been provided, aims to help ease the burden of the people temporarily. However, the vulnerable would face a heavy setback if they are eventually saddled with mounting interest at the end of the moratorium. To be sure, the moratorium is only to postpone, not cancel, loan payments.

Similarly, facilitating easier cash withdrawals from the Employees Provident Fund under the so-called i-Citra scheme would serve as temporary relief for the desperate, ie provided they still have their own money in the kitty. But such withdrawals would also mean that the retirement years of the workers are likely to be financially untenable because their life savings are being meddled with now.

It is also worrying that the Ministry of Housing and Local Government has called on those desperate for instant cash to borrow money from so-called community credit companies as if that was a panacea. That would only drive these people into deep indebtedness and trouble.

These measures are short term. A long-term and comprehensive strategy is needed to resuscitate the economy through institutional reforms, government assistance for the informal economy, job creation and retraining schemes, and a sustainable welfare system.

Government policies and strategies must be adequately thought through so that human stress, despair and low self-esteem can be reduced to a minimum for the benefit of all in the long run. – The Malaysian Insight 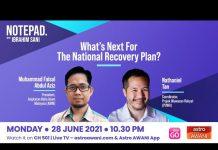 What’s next for the recovery plan?