The reported plight of the Performing Arts Centre of Penang (Penangpac) generally reflects the economic hardships many Malaysians at all levels of society face under the weight of the pandemic and consequent lockdowns.

Like many other industries, the creative arts industry, particularly the performing arts, encounters financial and operational difficulties arising from rolling lockdowns and physical distancing requirements.

As a result, performances had to be scaled down to ensure physical distancing, postponed or even cancelled. This obviously affects the sustainability of the industry as a whole.

Theatre outfits have to bear a colossal loss of income, while actors, stage managers and other production crew get pay cuts or are even laid off. Some switch jobs to become, for instance, plumbers or food sellers to make ends meet.

Actually, alarm bells had already been sounded in April last year by the Kuala Lumpur Performing Arts Centre (KLpac) regarding the financial losses faced by the performing arts sector because of the first lockdown. It seems the warning fell on deaf ears of people who matter.

The non-profit organisation, founded in 2005, receives no government funding.

Perhaps the arts is considered non-essential by the powers that be and hence, it received no immediate action.

This is most unfortunate as the creative arts should be recognised as being integral to the social, cultural, civic and economic wellbeing and vibrancy of our nation. It provides the ‘soul’ to the nation, if you like.

In the case of Penangpac, although steps had been taken to ease its financial problems, such as donation drives and staff pay cuts, the future still looks bleak. As a result, it asked for the government’s help.

The current financial standing only allows the outfit to stay afloat for less than two months. This is because no income can be generated for as long as the performing house is closed. Additionally, the production crew are not allowed to work in the studio to enable them to produce creative content for online consumption in order to generate income.

This plea for help emerged even after the federal government allocated RM100m in funding facilities and financial assistance supposedly to help over 8,000 people in the local arts and creative industry – which is part of the Pemulih economic aid package. But it appears that this band aid is not sufficient to help sustain the industry in the long run. And also, some people may not receive it or qualify for it.

Unless concrete steps are taken urgently to tackle the industry’s long-term survival, the performing arts may not be able to get back on its feet, thereby depriving not only the creative workers of their jobs but also ordinary Malaysians of their creative energy and output.

Malaysia would lose many creative talents if the industry is left to dwindle, that is, if the immense creative juices emanating from social media users during the pandemic is any indicator.

A tax exemption or deduction on the income received from online performances, for example, may go a long way towards helping the fledgling industry.

Performing groups may want to consider producing creative output for targeted audiences, such as schools and other educational institutions, as a way of generating income out of digital content.

Incidentally, this may well be an opportune moment to reset the academic curriculum so that such artistic content would be exposed to all students, irrespective of their academic streams or specialisation. So-called science-based students ought to appreciate and enjoy artistic performances.

Furthermore, an appreciation of the creative arts can be cultivated at a young age, thus promoting cultural enrichment that will benefit society.

For its part, the government through, say, the Ministry of Tourism, Arts and Culture, should carry out concerted campaigns to encourage people to consume such artistic online content in the comfort of their homes during the pandemic.

We must not let the curtain fall on the performing arts industry. – The Malaysian Insight 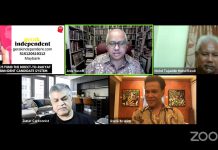