We should be able to sleep (and live) well once we’ve put the spectre of communism to bed, writes Mustafa K Anuar.

There seems to be a certain outmoded mentality that at times accompanies criticism and accusation levelled against particularly the DAP, now a component of the ruling Pakatan Harapan.

Even after the peace treaty between the Malaysian government and the Communist Party of Malaya (CPM) was inked and subsequently the party disbanded, the Berlin Wall collapsed and the Cold War ended, there still lurks the spectre of communism in the minds of those critical of the DAP.

The phrase “Reds under the bed” is lifted from the era of McCarthyism in the United States when there was intense anti-communism suspicion from the late 1940s until the late 1950s.

While there is no witch-hunt of such magnitude in the Malaysian context, it suffices to give some inkling of its ridiculous paranoia. Of course, there are other labels that are pinned on the Chinese-dominated party by its detractors, which will not be dealt here.

The latest spiel from former police Inspector General Musa Hassan only reminds us that the old record, ie communism, is still being played when the entire world has moved on.

These things have wreaked havoc to the world and human dignity in various degrees over the years. They demand our collective concentration and resolve to address them within our means.

And yet, Musa and others of similar ilk insist that the DAP is bent on reviving communism in the country, an accusation that would have been taken very seriously and appropriate form of punishment considered a few decades ago.

That said, a section of the Malay community is still averse to communism given its bitter experience during the previous communist insurgency.

Hence, the Musa accusation, although laughable to others, may have acquired some degree of traction among some Malays, thereby enhancing their hatred or suspicion towards the DAP.

Besides, labelling as a modus operandi generally has a way of short-circuiting sober arguments and oversimplifying things. It discourages people from civilised intellectual engagement in an effort to find the truth.

In other words, labelling is a short-hand way of demonising people.

Instead of being haunted by the ghost of bygone era, we should focus on challenges that require our urgent attention and action.

For example, we should mobilise our energies to help foster good ethnic relations at a time when the politics of race and religion tends to dominate and divide us for the benefit of none except the perpetrators.

It is crucial that we are united against such a divisive factor, which is capable of corrupting our sense of justice, compromising the rule of law and, in turn, preventing our country from achieving a higher level of socioeconomic progress and democracy.

A political culture that promotes and celebrates inclusivity would go a long way towards uniting a diverse society such as ours for a higher purpose of our existence.

We should also, for instance, put our heads together to plan and execute medium and long-term programmes aimed at addressing the issue of climate change at various levels of our society.

This could make a concern about communism look like unnecessary chatter. We should be able to sleep (and live) well once we’ve put the spectre of communism to bed. 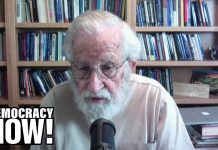 Noam Chomsky on Covid-19, WHO, China, Gaza and global capitalism