The only punishment for Tun Ahmad Fairuz, the former chief justice is to strip him of his Tun-ship and all awards ever bestowed on him, says Sarajun Hoda Abdul Hassan. He has not only turned out to be a disgrace to the legal fraternity and the Malaysian people but also brought shame and dishonor to the Yang DiPertuan Agong, the highest royal institution of the country who appointed him to the post, to the institution of the prime minister, who recommended him, and to all the sultans who bestowed on him awards.

V K Lingam must also be stripped of all the awards bestowed on him and debarred from ever practicing law in the country. All the judges appointed by the controversial bargains should either be retired or demoted in order that the Malaysian judiciary is cleaned up in order that it regains its veneration.

The Malaysian people whose legal privileges has been compromised and transgressed by Ahmad Fairuz’s immoral actions pray that Prime Minister Abdullah Ahmad Badawi will not miss this opportunity to improve people’s impression on him and prove that he is a man of credibility and integrity.

For that, his government must give Ahmad Fairuz a fitting punishment so that no judge in at least a thousand years will ever dare to compromise the judiciary. The prime minister must prove that his Islamic Hadhari teachings do not tolerate such obnoxious demeanor.

This is a question of national integrity. The whole world is watching us. Ahmad Fairuz brought humiliation and shame to the country, to the judiciary and to all lawyers. He and those who were involved together with him in this crime must therefore be severely condemned.

The people also are asking for all the cases where selective judgment was delivered to be re-heard including the million dollar defamation cases. These cases heard by a compromised judiciary must be reviewed and corrected. Those who won these controversial cases or those who escaped scot-free due to compromised judgments must be brought back to court.

The Istana Terengganu is said to have nearly withdrawn the Datukship titles from three people for the recent menteri besar crisis. The Sultan of Pahang revoked the titles of two ‘Datuks’ in 2004 and the Selangor Sultan also recently withdrew six Datuk titles for much lesser sins when compared to the shame and disrepute brought by Ahmad Fairuz to the institution of the Malaysian royalty. The withdrawal of his Tunship and all other titles is fitting. And it must be done at once.

Bar welcomes King’s decision not to proclaim an emergency 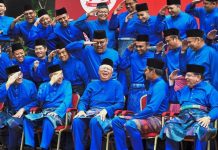 Let the truth be told