The Segamat Municipal Council has denied that it instructed officers to double up as religious police to ensure Muslims uphold their obligation to fast during Ramadan.

Almost akin to the modus operandi of a spy thriller, these officers, reported to be dark-skinned to pass off as foreign workers, were to disguise as cooks and waiters to facilitate their hidden agenda to nab unsuspecting Muslims eating at food outlets during fasting hours.

It would have been quite an excitement for an otherwise dry and hot Ramadan if the council instruction was true.

For by doing so, these officers themselves would have committed a serious dereliction of duty – because as council personnel, surely they have a list of priorities in their job scope, such as monitoring the cleanliness of eateries, food hygiene and urban sanitation, and ensuring efficient traffic management.

Sticking to their official job scope and doing it well would not only surely earn them kudos and respect from the tax-paying public, but also indirectly promote a good image of being Muslim.

As we all know, there are various ways of becoming a good Muslim. Spying on others – and thereby creating suspicion – is not the way.

Additionally, by “playing” dark-skinned foreign workers, these council officers would have cast unnecessary aspersions on workers, particularly Bangladeshi and Indian nationals, who are already generally given negative labels and treated badly by locals.

That’s “fitnah”, or slander – a cardinal sin in Islam.

Besides, the president of the local council concerned would know well enough that such councils are tasked with conducting specific work for the betterment of local communities, irrespective of their ethnicity and religious bent.

Helping police the religious obligations of Muslims is certainly not part of local councils’ job specifications. Neither is this the kind of trailblazing that we would expect of our local councils. If anything, such detective work on the part of council officers is a waste of public resources, apart from being a misguided mission.

To reiterate, local councils should be accountable to members of local communities, in terms of catering to their general needs.

Leave the job of playing religious sleuths to the religious authorities, who normally take upon themselves the responsibility of “straightening” supposedly wayward Muslims, especially during the month of Ramadan.

In a sense, if the council instruction was true – as reported by an English-language newspaper – the “innovation” of the local council in question would be seen as a form of lslamisation that has gone overboard, which is worrying indeed.

It is a relief, as hurriedly assured by the local council president, that there has been no instruction to officers to become undercover agents – a talent within their ranks that should be left untapped.

Otherwise, Segamat would have made world headlines – for the wrong reason. 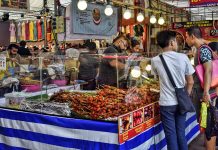