The area around the Kaaba is at times filled with people. Here, the supposedly wretched of the earth stand cheek by jowl with the elite of society in their devotion to Allah, observes Mustafa K Anuar.

The Kaaba is a sight to behold, especially among the Muslim faithful who perform their haj as well as the umrah in the physical realm of the Grand Mosque of Mecca, popularly known as al-Masjid al-Haram.

Located at the centre of the mosque, the Kaaba (meaning “cube” in Arabic) is the holiest site of the Muslims the world over who turn to it during their daily prayers. It is also the metaphorical House of God around which the pilgrims or God’s guests circumambulate in an anti-clockwise direction when performing the tawaf.

The faithful – from diverse backgrounds all over the world – move around the Kaaba in a wave-like motion, symbolising their unity in the worship of One God. Here, they are expected to purify and rid themselves of worldly concerns and distractions. Never mind the shopping malls that are at a stone’s throw away from the spiritual sanctuary.

The fact that those male pilgrims in ihram are garbed in only two-piece white cloth is, to me, indicative of the simple dressing serving as a leveller of things, apart from a grim reminder that in death, Muslims are also wrapped in white cloth.

Ihram is the sacred state a Muslim enters into before performing the haj (major pilgrimage) or the umrah (minor pilgrimage).

Social divisions, such as class, social status, ethnicity and skin colour, don’t count for much in the divine scheme of things. Obviously, there is no favouritism based on these worldly constructs. To be merely Algerian, Turk, Indian, Malay, Chinese, Spaniard or Nigerian is no measure of superiority of one over others. Only piety makes a difference.

At most times, the area around the Kaaba is filled to the brim with people. Here, the supposedly wretched of the earth stand cheek by jowl with the elite of society in their devotion to Allah. In a sense, any kind of worldly distinction melts in this sea of humanity that flows within a divine domain.

In this regard, I’m reminded of Surah Al-Hujurat (49:13) of the Quran, a favourite of mine: “O mankind, indeed We have created you from male and female and make you peoples and tribes that you may know one another. Indeed, the most noble of you in the sight of Allah is the most righteous of you. Indeed, Allah is Knowing and Acquainted.”

The diversity of people in this world, which in itself is a sign of God’s greatness, is meant to be celebrated. Not to be used as a cause for friction, factionalism and tribalism.

Some of the less endowed of the faithful display steely determination to devote themselves to the Merciful and Compassionate. They pray in open air defying the heat of the scorching sun, especially when the mosque is overflowíng with other adherents. A test of their faith, too.

The patience and love of others is also tested. Husband hurriedly pushes his wheelchair-bound wife to the mosque, and a wife does the same for her disabled husband. It’s also heartening to see grown-up children wheeling their beloved parents to the most crowded congregation on earth.

It is also a challenge to your patience to try and carve a physical space out of a crowded section of the mosque. But it is in such close proximity that you get to strike a conversation with your neighbour – even though at its barest level possible due to the language barrier.

“Me from Malaysia. You?”

“Baluchistan in Pakistan,” he said with a smile, insisting that I take his photograph, which I obliged.

This is indeed all part and parcel of being the guests of Allah, estimated to at two million this year. 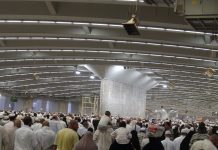