This ritual is also about exorcising the Satan in you that comes in the daily form of a hardened ego, arrogance and selfishness, writes Mustafa K Anuar.

Thousands poured into the streets of Mina, about 10km from Mecca, to perform the last of their haj rituals at a place called Jamarat.

The Muslim faithful are obliged to pelt seven stones at each of the three stone pillars, namely Jamarat-al-Ula, Jamarat-al-Wusta and Jamarat-al-Aqaba. The stone pillars are roughly equidistant from each other and can be accessed from three levels to enable more of the faithful to perform the act at any given time.

Many came in chartered buses while others walked many kilometres to get here, as it is believed that braving the odds is indicative of a pilgrim’s unwavering devotion to the Almighty. There were also those who walked relentlessly simply because they had to, as they didn’t have the financial means to hop onto any of the buses or taxis.

A few of the latter group set up small tents under a nearby bridge for their sojourn. Others of the underclass, especially those who did not have a proper place to stay, relied on the basic facility of plastic or praying mats and as cardboard to keep their weathered bodies off the street dirt. Some of them, with meagre worldly possessions, had also nonchalantly ‘parked’ themselves along a busy road lined with air-conditioned tents housing the rich and famous among the pilgrims.

It was in these crowded spaces that the underprivileged prayed, ate their little dinners, socialised and napped while their kids jumped about in an atmosphere the latter would have considered a carnival. The stench from nearby drains filled the warm evening air.

The crowdedness of the entire site hit a critical point when others who had arrived on public transport sought temporary space while observing the required mabit, an obligatory overnight stay. This often resulted in such groups setting up “mini-colonies” along the overcrowded roads, prompting Saudi police, often in patrol cars with a deafening horn, to shoo people off the streets.

Some Malaysians, like other nationalities who had no proper temporary shelter to head to while waiting for the right time to pelt stones in the dead of night, fell victim to this endless game of hide-and-seek with the police, who were concerned about their safety and smooth human traffic flow on the roads. Sometimes, the single-mindedness of certain police officers was met with the nagging stubbornness of certain street dwellers or a delayed response from people with disabilities.

It was already five minutes after the subuh prayers, and thus, time for my group to head to Jamarat to perform rituals reminiscent of Prophet Ibrahim’s unquestioning devotion to Allah.

According to the holy teachings, Satan attempted to deceive Prophet Ibrahim into defying God’s command to sacrifice his son, Ismail. (The commanded human sacrifice, which was a divine test for both father and son, was later substituted with animal sacrifices.) It was at these Jamarat locations that the prophet pelted stones at the scheming Satan to scuttle the latter’s diabolical plan.

Hence, the stone pelting is often associated with the fight against Satan. For many others, this ritual is also about exorcising the Satan in you that comes in the daily form of a hardened ego, arrogance, selfishness, uncharitable self, impatience, slander and other dark characteristics.

The long path to these stone pillars challenges your determination and patience, especially if you end up with the kind of blisters I endured during this period.

But then, what are my blisters compared with the woman – presumably from the African continent – in front of me who paced towards the pillars with crutches to assist her only leg while, at the same time, carrying her toddler tied to her back? Her grit subsequently spurred me on to finish as soon as possible what I had set out to do and, at the same time, give thanks to the Almighty for the strength and physical ability I maintained at the time.

Many others, including those on wheelchairs, encountered various challenges and tests during the haj. A few succumbed to illness.

It is also throughout the course of the haj that new friendships are forged and generous help offered to give deeper meaning to being part of the larger ummah. 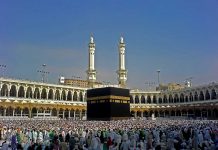 Seeking to please the Almighty