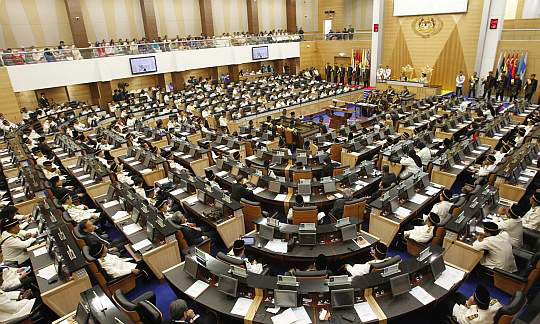 On the second day of the current parliamentary sitting, Prime Minister Anwar Ibrahim rightly called on MPs on both sides of the aisle to exercise restraint and observe decorum when indulging in debates in the august House of Representatives.

He said that while MPs might differ in opinions over many issues, they need not resort to antics that crossed the line of civility. MPs should not become a laughing stock.

Anwar instructed his party’s chief whip to do what was necessary to ensure good behaviour among government MPs. He hoped the opposition would follow suit so that the House of Representatives would not be reduced to a circus.

His concern was expressed in the wake of a commotion that broke out on the first day of the parliamentary sitting when lawmakers were debating a vote of confidence.

The heckling and shouting that ensued were a throwback to parliamentary proceedings of yore, which suggests that things have not changed much in formal politics.

MPs who were making a point were shouted down, while others resorted to unparliamentary language such as “bodoh” (stupid). Name-calling is uninspiring and a darned lazy tactic.

We fear that some, who were busily trading insults, might have succeeded only in making themselves look stupid. And we obviously do not need stupid parliamentarians.

A few indulged in filibuster – purposely trying to delay the confidence vote for reasons only best known to themselves – but in the process made fools of themselves. What a waste of time and money that had to be paid in attendance allowances, which is pinched from the public fund.

READ MORE:  Pursue decentralisation, not over-representation for Sarawak and Sabah

You don’t need to shout to make your point known, nor do you have to rage for attention.

Anwar seems to have shown what decorum and a well-crafted argument looks like when he addressed the issue of personal attacks by opposition leader Hamzah Zainudin.

“It’s a tale told by an idiot, full of sound and fury, signifying nothing,” said Anwar, quoting Shakespeare’s Macbeth. The Tambun MP released his salvo with composure but with no less bite.

Many in Malaysia have longed for better standards of debate among elected representatives, enlivened by witty repartee.

One can be funny in an intellectual exchange without being sexist or lewd. Proceedings in the past, as if we need reminding, were littered with filthy jokes expressed by old men.

Polished and intellectually challenging jokes are what separate the boys and girls from men and women.

Senior MPs in particular should not be a bad example for rookies learning the ropes. They should instead impress upon their juniors that a good debate requires preparation in terms of reading and research.

But more importantly, the MPs are in the august chamber to express views that represent the interests and concerns of their electorate. There are ferocious floods, deadly landslides, high inflation, an economic downturn and other pressing problems to keep them busy for a long time to come.

Parliament is obviously not a stage for MPs to strut or perform like court jesters. – The Malaysian Insight

A cool, fact based and convincing assessment of an event of great national interest. I look forward to hearing more from Dr. MKA