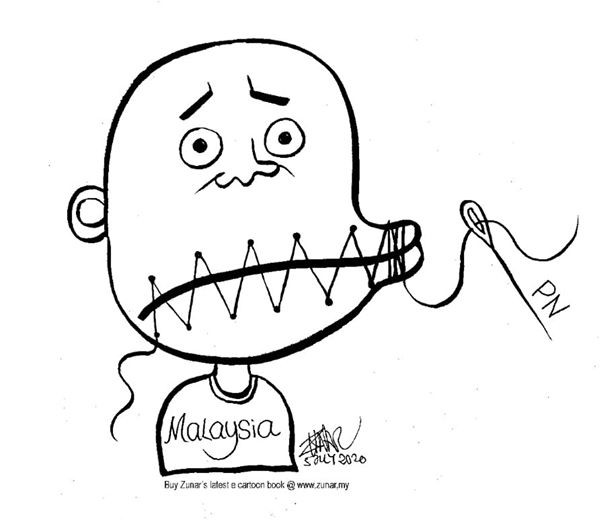 It is instructive that in announcing Umno’s rushed proposal for the date of the general election, party secretary-general Ahmad Maslan also managed to slip into his press statement the matter of the sacking of vocal party veteran Zaharin Mohd Yasin.

The Umno supreme council sacked Zaharin last Saturday because he had allegedly violated the code of ethics under article 20.9 of the party aonstitution.

In response, the prolific blogger said he had not been served a show cause letter nor had he been asked to present himself before the party’s disciplinary board. Put another way, he had not been given the opportunity to defend himself.

To be sure, the former Bandar Tun Razak Umno secretary is no stranger to sackings. He had been dismissed twice before: once during Dr Mahathir Mohamad’s tenure as Prime Minister and again during Abdullah Badawi’s.

Zaharin sarcastically thanked the supreme council for having fired him, saying this would allow him much freedom to write and give his views, particularly concerning Umno. This is the crux of the matter.

He has been a staunch critic of the Umno leadership, particularly party president Zahid Hamidi, for quite some time now as he is concerned that the party’s fortunes could go south because of the corruption charges faced by the party’s so-called ‘court cluster’.

His sacking reflects the inability – or rather, refusal – of the party and its leadership to accept dissent, which is disturbing.

Dismissals of this nature deprive a party of much-needed checks and balances as well as alternative ideas that could be useful for growth in the long run. It is also undemocratic.

Zaharin’s case brings forth the question of a place of dissent in party politics and in wider society. Surely party unity and discipline, as Zahid professedly upholds, should not be attained at the expense of dissenting voices.

The importance of dissent was underlined by DAP central executive committee member Ronnie Liu, who advocated “constructive principled dissent” – as opposed to destructive dissent that can be divisive.

The Selangor Legislative Assembly member for Sungai Pelek had pushed for this in response to the central executive committee’s decision to amend the DAP constitution so that those who disobey party directives will be sacked by the committee. The decision was achieved on the back of a move to draft an anti-‘party hopping’ law in Malaysia.

Liu and others on a similar wavelength are worried that critics who have good intentions would be snubbed and rejected simply because they have ideas that run counter to those of the party leadership. It is feared that a party with such an inclination could be on a slippery slope to authoritarianism.

Having differences of opinion should not be a convenient justification for showing the dissenters the door.

A party mostly composed of yes men could become fossilised in the face of changing times.

The presence of such politicians would also deprive the affected electorate of the kind of people’s representatives who would have the moral fibre to stand up for what they believe in or represent the collective needs of their electorate despite opposition from their own parties.

It is unfortunate that Amanah, another coalition partner of Pakatan Harapan, has also decided to make a similar amendment to its constitution to the effect that those who disobey party instructions could be dismissed.

Parties that profess to be politically enlightened and democratic should not take this muddied path. – The Malaysian Insight