A comparison of her international record and titles during her over-20-year career with those of any other sports icon shows that she deserves to belong at the upper echelons of the sporting world’s hall of fame, My Hometown reports.

Squash is possibly amongst the hardest games in its physical and mental demands.

It is so lightning fast and totally exhausting, you have to be well-conditioned, have exceptional eye-hand coordination and reflexes, and be super competitive to make it to the top of the sport. This makes the achievement of Nicol David even more remarkable.

Multiple Malaysia champion, Asian champion and world champion Nicol has been the most successful Malaysian sports person in the nation’s history with a record number of titles that is unlikely to be ever surpassed.

A comparison of her international record and titles during her over-20-year career with those of any other sports icon such as Roger Federer, Serena Williams, Tiger Woods, Michael Jordan and others at the same level shows that she deserves to belong to the highest ranking in the sporting world’s hall of fame.

Nicol first began playing squash when she was five years old, and received coaching at eight. While Nicol was training at the Bukit Dumbar Squash Centre, her potential was spotted by Ee Phoeh Hoon, who led her to represent Penang.

Nicol’s squash career began in 1992 when she won silver in the under-14 category of the Penang Junior Championship. In 1994 she was chosen to join the Penang state squash team for the Malaysia Games, where she helped Penang win gold in the team event. In the same year, she won her first two international titles – the Hong Kong under-13 and the Scottish Junior Open under-12.

In 1999 she won the Women’s World Junior Squash Championships as a 15-year-old, making her the youngest woman to become junior champion. In the process, she defeated three players ranked in the world top 20. She successfully defended the title in Penang in 2001, becoming one of only two players in the history of squash to have won it twice.

In 1999 Nicol began to win major junior tournaments, including the British Junior Open, the German Junior Open, the Sea Games (champion in the senior and team categories) and the Asian junior champion for both individual and team events.

When Nicol turned professional in 2000 at the young age of 17, it was no surprise that she toiled for a few years before hitting the big time in the sport.

In 2005 she won the World Games in Germany, the Malaysian Open and the British Open in a rise which saw her also voted by her fellow members of the Women’s International Squash Players Association as the Wispa Player of The Year 2005.

In January 2006, Nicol became the world number one female player, the first Malaysian and the first Asian woman to achieve that feat.

Since then, Nicol has not only reigned at the top of the squash world but has achieved remarkable durability that only very few others such as Federer and Rafael Nadal in tennis and Lin Dan and Lee Chong Wei can match in the racquet world.

In July 2016 she reached her 151st successive month in the top 10, breaking the record in both the men’s and women’s categories.

In a poll conducted in 2018 by the Professional Squash Association, Nicol David was voted by fans as the greatest squash player of all time in the women’s category.

In her own words

“A woman has actually made it … if she has the love and passion towards their fullest reach of their potential.”

“When I’ve trained and followed the programme as hard as I could, I trust that when I go into a competition, everything will fall into place.”

“Enjoy what you do. Take care of your body when you are young so that you do not live with regrets. Squash is hard work and intense on your body and muscles, and you need to try to avoid injuries as much as possible. Make the most of the opportunities you have to travel to new territories to participate in tournaments and meet different people, learn about different cultures and expand your knowledge base.”

“If I want to indulge, it will be a good roti canai and teh tarik on the side.” 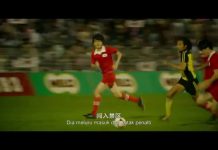 How a sports university would benefit Malaysia

Nicol is a role model for young Malaysians.