The Myanmar junta warned anti-coup protesters they could die, but thousands of people took to the streets again on Monday, with tensions soaring over the deaths of four demonstrators, France 24 English reports.

Protesters flocked to Myanmar’s city of Mandalay on Monday, despite a chilling message from the junta that confrontation would cost more lives, Reuters reports.

Demonstrators in Yangon continued to march and sing as Myanmar’s protesters called for a general strike to oppose the military coup. 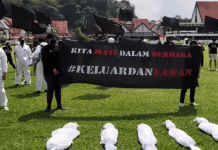