The Budget will be tabled in Parliament on 11 October. This will be the second Budget of the new Pakatan Harapan government, after 60 years of Barisan National rule.

Last year, the government had too little time to introduce proper budget proposals that would define new PH budget directions.

Hence this Budget must show a difference. It must reflect more of the new government’s socioeconomic thinking and proposals for the 12th Malaysia Plan.

So what could be the strategy for the coming Budget?

In devising the Budget strategy, the Treasury would have to consider the world economic environment and outlook. Major international economic agencies have highlighted an economic slowdown for all economies.

With the ongoing trade war between the two economic giants, the US and China, the trade outlook seems poor. Other problems include persistent turmoil in the Middle East and unpredictable petroleum prices. The Budget should also consider the growing uncertainties of global climate changes, and the damaging haze in South East Asia.

Considering all this, the prospects for and financial decline are becoming real.
The Malaysian economy is thus expected to suffer a slowdown – a fall in economic growth to 4.0-4.5% next year. Growth may even be less in the years ahead – but who can say for sure?

Unemployment, especially of graduates will then rise. Incomes are likely to fall. Inflation is unlikely to lessen. Life, especially for the bottom 40% of households, particularly the bottom 20%, could become more difficult. Budget revenues would also decline. But government salaries, debt and pensions would still have to be serviced.

The coming Budget will hence face severe constraints. The budget deficit will be under greater pressure to rise – instead of fall, as the government had planned. Meanwhile, global rating Agencies are monitoring our Budget.

The Budget will have to be more realistic and allow the deficit to rise slightly to face the global economic challenges. This would enable Malaysians, particularly the poor, to be more comfortable despite the slowdown.

So what can Malaysians expect from the Budget? Many Malaysians will expect the Budget to reveal new proposals to better reflect the budget theme of ‘shared prosperity’.

Poverty line: This is currently too low, as indicated by UN special rapporteur. The Budget has to come clear on this vital issue. A new poverty line would provide the basis for the Budget’s expenditure policies and allocations to fight poverty. The Budget should have special anti-poverty proposals for the lowest 20% of households, regardless of ethnicity and religion. This would be a new approach that would be widely accepted as just and fair, in line with our national values.

Minimum wage: This is low and could be gradually raised to a decent living wage. The basic initial adjustments could be announced in the Budget speech.

Inflation: This has been rising and should be contained. Here again, there should be cost of living indices for the poor. These would help in designing specific policies and programmes to reduce poverty and tackle widening income gaps. Income inequality has to be bridged to meet UN sustainable development goals, especially the no-poverty goal.

Digital economy: This is catching up faster than we expected. The Budget has to introduce new incentives to encourage small and medium-sized enterprises (SMEs) to innovate more. They need to adopt the new technologies of the digital age of Industry 4.0 and 5.0 in the future. If SMEs in China can do it, why can’t we? Perhaps, we should invite experts from China to help us.

Environmental challenges: These are threatening our future growth, income distribution and progress. This is evident from the way we treat our own rubbish disposal and the rubbish from foreigners who dump their rubbish for us to clean up. Worse is when we silently ignore and endure the problem. We even tolerate toxic industries which others reject. The Budget has to come up with new proposals from the new government, which should be different from the previous corrupt government.

Technical and vocational training, science and technology: These should be given more allocations. We cannot urge the Ministry of Education to do more when we allocate it less than their basic financial requirements. We also need to choose skilled trainers on the basis of merit instead of employing under-qualified teachers who cannot perform. Otherwise, we will have more unemployed graduates. and more public frustration.

Healthcare and other social services: The new PH government should review and revise these services. The long-awaited health insurance scheme could be introduced in the Budget as soon as possible. Very low hospital charges could be adjusted to gain more revenue. The poor need not pay higher charges, but the better off could be charged more and encouraged to use private medical services. This important principle could be applied across the board, to be fair to all. After all, this could be ‘shared prosperity’.

Taxes: These should be slightly and gradually increased, under ‘shared prosperity’ policies The wealthy could be taxed more. How else do we share prosperity? Nordic and many developed countries have superior welfare services. This is because their tax rates are much higher and their services are more efficiently provided. They don’t have the wastage and corruption that we have today. Yet we ask for more and want it all by paying far lower taxes? The Budget should, therefore, raise some taxes, even slightly. Foreign investors will not be deterred from investing more in Malaysia due to higher taxes. They are attracted to Malaysia for its natural resources, quality of life, security and safety and prospects. But we cannot take foreign investments for granted.

National unity: Like all Malaysians, foreign and domestic investors look to our national unity, inter-ethnic harmony, religious appreciation and wellbeing. These have to be maintained and sustained if business confidence is to expand in the future and if we are to be able to compete with our neighbours. This means promoting genuine inclusiveness, which should include the just treatment of all state governments – particularly the poorer states of Sabah and Sarawak as promised in the financial agreements of the Malaysia Agreement 1963. Investors and all moderates, anywhere and everywhere, will not tolerate too much politicking, racialism and religious bigotry.

In conclusion, the Budget should encourage and provide incentives to the best talents among us. It should attract some of the best brains from abroad to return home and contribute to a better, fairer, more stable, prosperous and sustainable Malaysia – for all Malaysians and for our posterity.

Finally, most Malaysians will expect a realistic Budget with mild growth – a budget that prioritises the poor in the interests of protecting budget integrity, social stability and real progress for all Malaysians. 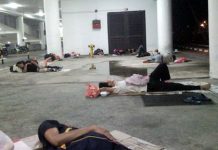 Tax the wealthy, not the middle class and the poor