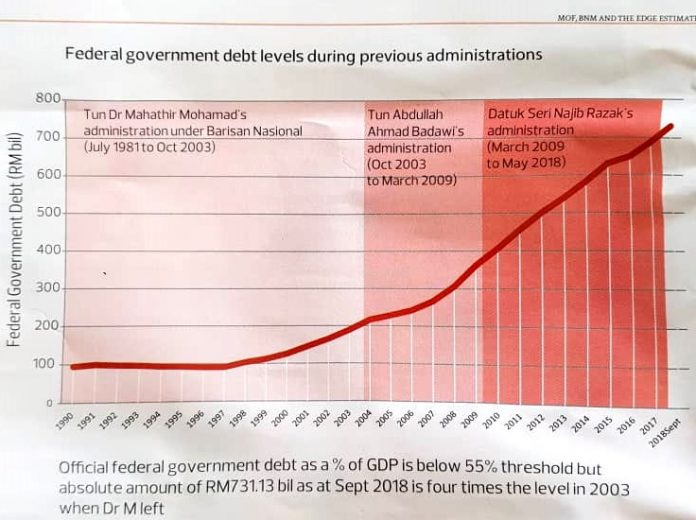 We could face a real slowdown in key areas if we don’t overcome our lingering weaknesses, writes Ramon Navaratnam.

The international Fitch Ratings agency has given us a warning on the outlook for the Malaysian economy, which we should not ignore or neglect.

In preparing for the coming Budget, government economic and financial planners should therefore take heed of this friendly warning and act sooner rather than later.

We should not let this warning pass without having more consultations with Fitch, on how serious its constructive criticism could turn out to be.

But several of its reservations must be carefully considered and monitored for the nation to remain on an even keel and progress further.

What are these Fitch warnings?

Fitch now confirms the national debt to be high. By whatever standard of measurement used – by us, by the International Monetary Fund. the World Bank and other agencies – we now have have consensus that our debt is indeed high, although still not critical.

But we have to watch the debt closely, We must ensure better management of our budgeted expenditures and strive to strengthen our budgeted Revenue to reduce the pressure to borrow more in the short to medium term.

These structural factors would refer to our need to increase productivity, competition and meritocracy and to strengthen our successes in combating corruption and cronyism.

How far have we advanced to effectively tackle these longstanding structural issues?

In the minds of our foreign and even domestic Investors, how successful have we been compared to the previous regime?

Fitch expects our economy to slow down to 4.4% this year and 4.5% in 2020. With the US -China trade war looming large and the general world economic uncertainty, investors can get even more jittery and hold back their investment plans. Thus low economic growth rates for this year and beyond should not be ruled out.

If the economy softens further to around 4% per annum, the prospect of unemployment, especially for graduates, could be worrisome. Small and medium-sized businesses, farmers, fishermen and plantation smallholders could suffer much from any slowdown.

But we are still slow and are struggling to restructure the economy. We have not yet adopted major changes to transform the economy, which is largely race-based, to become more needs-based in its policies and their implementation.

We need a new economic model, but it has been difficult to adopt it as soon as possible.

To be fair, many measures have been taken to strengthen the institutions of government. We have seen this in the parliamentary select committees, the Electoral Commission, the Malaysian Anti-Corruption Commission, the civil service and other institutions required to boost good governance.

We cannot do too much too soon, as good governance takes much longer to restore and build up, after several decades of neglect in the past. But our people and investors are somewhat impatient for more rapid changes for better governance.

Fitch has however subtly warned us to compare our “weak governance relative to our peers”.

Thus we have to take note of the more rapid progress made by our neighboring counteies in Asean – like Vietnam, Thailand, Indonesia and of course Singapore -to measure our real success in good governance.

Investors have the whole world to choose from, to put their money where their mouth is. They also need not look at the comfortable physical climate and tax incentives alone to be attracted to invest in Malaysia.

Racial harmony, religious understanding and political stability are also major considerations for both domestic and foreign investors and professionals. This is where the reduction of the brain drain is important. But we continue to have a strong outflow of brain power, which is debilitating.

Fitch warns that the Pakatan Haparan coalition government holds only a small majority in Parliament and has seen its previously high public approval rating fall significantly.

Fitch`s assessment is quite correct. This has been due to too much politicking and allegation of sex scandals. All this does not give confidence to investors and even consumers who will be dampened in their enthusiasm to increase consumption and investment.

The international Fitch Ratings agency has subtly and politely warned us of the challenges we are facing.

It has also emphasised in its usual guarded fashion the essential need for us to take heed of its advice and warnings, to make the necessary socioeconomic and political adjustments, changes and even transformation, without undue delay.

We could face a real slowdown all round in all socioeconomic, political and environmental fields if we don’t consolidate our strengths to overcome our lingering weaknesses, to forge ahead to a better Malaysia in the future – for all Malaysians, please!