A group of Malay motor workshop technicians who operate in Penang have the diligence and raw grit that make the much-touted New Economic Policy superfluous to them, writes Mustafa K Anuar.

Their single-mindedness to survive and technical skills accumulated over the years are the much-needed cultural capital that has helped them to succeed in the business of repairing motor vehicles.

This is especially so in the absence of governmental or institutional assistance to small Malay enterprises such as theirs.

The Malaysian Insight talked to two of several Malay owners of motor vehicle workshops – spread over the areas of Sungai Ara, Bayan Lepas and Batu Maung on the island – to gauge their determination and how they cope with the challenges in the business.

Nordin Karim (not his real name) and his partners set up a small motor workshop out of a wooden shed tucked in a leafy corner of what used to be a Malay kampung in Sungai Ara.

In his teens, Nordin went to a technical school and later started working at a car workshop to learn the ropes for a few years before he went on his own.

The 44-year-old said that he and his business partners initially operated from a small kampung house they rented about 20 years ago, which was only big enough to cater to two cars at any one time.

Some 12 years later, the premises has transformed, which subsequently enabled them to open up the area and build a larger shed to cater to more vehicles.

“Capital,” said Nordin, “has always been the nagging problem.”

With no government support or funding especially in the initial years, Nordin and partners had to rely on their small savings to buy basic tools such as welding gas for the trade.

“We also couldn’t apply for bank loans,” he added, “because we did not have the necessary collateral.”

Nordin said competition is now tougher with the emergence of new motor vehicle workshops in the new townships adjacent to Sungai Ara.

But this reality does not break their spirit of perseverance because the overriding importance for them is to build trust and assure quality service to their customers.

They also strive hard to honour their promise of date of service completion to their customers.

This explains why their clientele is wide-ranging. They serve people not only in the vicinity, but also factories from the Bayan Lepas industrial estate, workers from nearby factories and a public university.

The owners’ diligence and commitment to quality work as well as the discipline to pay bills on time earn them the trust of dealers of spare parts.

As a result, the workshop owners are given a credit facility that allows them to pay in instalments for the parts purchased.

After having established the business at this location, Nordin and partners, however, are now in search of an alternative site for their motor workshop because they have been served with an eviction notice by the landowner who apparently is planning to develop the plot of land.

Ramli Mohamed (not his real name) inherited his motor workshop in Batu Maung from his father who started the business many years ago.

Ramli’s workshop also sits on rented land, and he later expanded the building into a bigger shed to cater to a bigger clientele.

Trained by his dad, Ramli is confident that he will still survive despite increasing competition in the area as “my customers know the quality of my work”.

Like Nordin, he also had to rely on his savings to buy basic equipment, given that he did not get any government assistance.

Another problem in recent times is that the prices of spare parts have risen, thereby making repair costs relatively higher.

He said, “It’s not just the GST; it is also because the declining value of the ringgit over the years has made imported spare parts more expensive for us as well as our customers.”

As a result, he said, many customers have become prudent so that, for instance, they would only change certain car parts after being fully convinced the parts are broken.

His workshop was once situated in a sleepy village next to a two-lane road when it started, but the road has now transformed into a highway so that in certain areas in Batu Maung, physical space for other workshops becomes constrained.

Parking, then, becomes a problem for customers especially of those small Malay workshops that have been hemmed in by the expanded road. 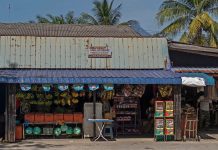