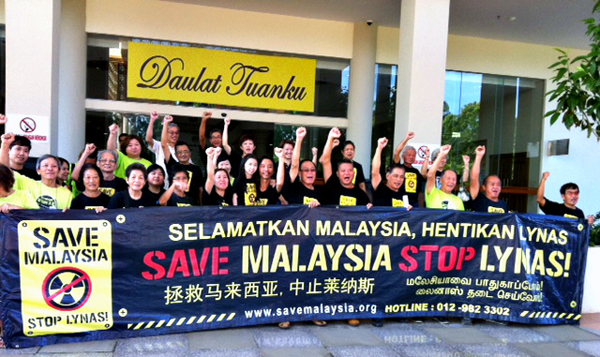 With the cabinet due to make its decision soon, David Anthony explores what’s behind the Pakatan Harapan’s government reversal of its position on the rare earth refinery.

Asean Foreign Ministers in Bangkok on 3 August called for a stop to the illegal trans-boundary movement of hazardous chemicals and waste, expressing concern about the protection of human health and the environment.

The ministers were referring mainly to plastic waste.

But what if a similar movement of hazardous chemicals was allowed to operate legally by a government? I am referring to the Lynas Malaysia Sdn Bhd’s rare earth refinery in Gebeng.

Lynas maintains that it has complied with its licence conditions requiring residue to be stored safely.

But how has it complied when it says that it cannot export 450,000 tonnes of the water leach purification (WLP) residue, a by-product of its refinery operations, by September and instead offered to build a permanent disposal facility (PDF) as a compromise? This means that the radioactive residue remains in Malaysia.

The license was issued by the previous government and the present Pakatan Harapan government wants to extend the licence.

Blaming Barisan Nasional for the country’s disasters and yet continuing the process is not the change of government the people of Gebeng wanted.

Lynas has deposited $42.2m (RM177m) in cash and cash-backed bonds with the government to fund long-term residue management at its Pahang plant. Is money the reason for the continuance?

The plant’s three-year permit will expire on 2 September, and the government wants to extend the permit for another six months until they come up with a plan to deal with the WLP residue.

And they plan to do that by using the disused tin mines in Pahang. Is that a wise proposition, when almost all groundwater in the peninsula is connected?

Energy, Science, Technology, Environment and Climate Change Minister Yeo Bee Yin, who has expert knowledge on the matter, was adamant that the plant’s radioactive waste should not be kept on Malaysian soil but be shipped back to Australia as a prerequisite for Lynas’ licence renewal.

Australia was equally adamant in not accepting it back. Lynas Corp welcomed Prime Minister Dr Mahathir Mohamad’s announcement of the removal of the requirement for it to repatriate its waste as a precondition for its licence renewal, despite what Minister Yeo said.

She admitted this is not ideal but is a better resolution. Is it really?

Do we understand the long-term hazards of radioactivity? Although radioactive hazards are claimed to be containable, rare earth metals remain dangerous for a long time because they contain thorium and uranium. Should we take that risk?

In 1982, Asia Rare Earth Sdn Bhd, a rare earth metal extracting company, was opened in Bukit Merah by Mitsubishi Chemical Industries Ltd and Beh Minerals. It was extracting yttrium, a rare earth from monazite which contains thorium and uranium.

People in the nearby town of Papan complained of smoke and foul smell coming from the factory and had difficulty breathing. Asia Rare Earth had built a waste dump near the town.

The people started to take action. Papan residents, with support from friends, blocked the road to the waste dumpsite. More than 3,000 people including women and children held a peaceful assembly and signed a petition and sent it to Mahathir.

Mahathir’s response was that the government had taken every precaution to ensure safety, and the construction of the radioactive disposal site would be continued.

The construction was said to be flimsy. The concrete walls of the dumpsite were barely one inch thick.

Support for the Papan people’s struggle grew, joined by the residents of Bukit Merah, Lahat, Meglembu and Taman Badri Shah and concerned activists from Penang and Kuala Lumpur.

The local people formed the Bukit Merah Acting Committee, supported by Sahabat Alam Malaysia. They measured the radiation levels and found it to be 88 times higher than the upper limit allowed by the International Commission of Radiology Protection (ICRP). They submitted a memorandum to the prime minsiter.

The government invited the UN’s International Atomic Energy Agency (IAEA) and they declared that the waste was not safe for the public.

The government decided to go through with the original plan anyway. The residents went on a one-day hunger strike.

It was a long struggle. Several experts were brought in, and against their findings, the government persisted in letting Asian Rare Earth operate until the residents themselves took the matter to court.

The people won when the court ordered a halt.

Yet, Asian Rare Earth appealed. It went back and forth, a drawn-out battle that took 32 months.

In July 1992, the residents finally won their suit against Asian Rare Earth. But the company only closed the factory on 19 January 1994.

Bukit Merah’s site clean-up had been the largest radiation clean-up so far in the world’s rare earth industry.

Lynas claims to provide employment to numerous workers who are also urged to defend the company. Working in such close proximity to radioactivity, they cannot be totally unexposed.

The processing of radioactive materials at Bukit Merah was reportedly associated with eight cases of leukaemia and seven deaths.

Mrs Lai Kwan worked in a lumber mill. She was offered a better paying job at Asian Rare Earth. She was pregnant and her son was born with physical defects and cataracts and atrial septal defect (ASD) and mental problems.

Asian Rare Earth began operations in Nagoya, Japan and was the cause of severe asthma there. And they moved to Malaysia.

Was Lynas a cause for concern in Australia? Why did they move to Malaysia, and why does Australia adamantly refuse to take back the WLP? The answer is only too obvious. Malaysia has become a dumpsite for the second time.

Wong has said that dumping radioactive waste in abandoned mines is akin to killing a rape victim. Instead of healing the piece of land, we are destroying it forever.

Tan is calling for a legal challenge through a judicial review initiated by the residents if the government decides to lift the condition placed on Lynas by the environment minister.

This is a commendable move and the Gebeng residents should be supported for the future of all, especially the young people.

The young people, now that they have been given the chance to vote, should already begin to voice out now and claim their future.

It is indeed their future that is in the balance. The Pakatan Harapan government ought to consider that giving 18-year-olds the chance to vote while destroying their future could well become counterproductive.

It is our hope that the cabinet representing the people makes a decision in favour of the people on 15 August.

The real issue with LYNAS is “HOW IT BEGAN.” It was an easy target – low hanging fruit. I joined in too – at the beginning. We all wanted to get rid of the old corrupted regime at any cost. Yes, I was at the protests in Taman Gelora, heard the fiery speeches and was optimistically excited. Here was an issue that would get the people’s attention. After all who doesn’t want to protect their physical well being, their family, their possessions. It’s a “nuclear plant”, “toxic radioactivity”, “remember the other rare earth fiasco”. So that started the LYNAS fear wagon. And it was working, had great momentum and politically red hot. Several would be politicians seized on this band wagon and rode it to the hilt…but then science stepped in…

These imported radioactive fertilizers have been “spread out” over all our land and have not been proven to cause any harm or any increase in radioactivity.

Malaysian soil has an average of 82 Bq/Kg or 20 ppm of Thorium (IAEA).

So the amount of radioactivity contributed by Lynas is just peanuts!

♥ For transportation purposes, A RADIOACTIVE MATERIAL IS DEFINED AS ANY MATERIAL WHICH HAS A SPECIFIC ACTIVITY GREATER THAN

As a result any material that contains Uranium and Thorium with a combined activity of just 1 Bq/g needs to be regulated by AELB.

IT’S TIME FOR MALAYSIA TO “DOWNGRADE” IT’S STANDARDS TO THAT OF THE STANDARDS OF THE MORE ADVANCED COUNTRIES ! ! !

THE WLP RESIDUE IS CLASSIFIED AS VLLW (Very Low Level Waste) and can easily be diluted to below 1 Bq/g to qualify as a material which is beyond all regulatory controls and is fit to be eaten (if edible) in the USA and the EU.

If the WLP, FGD and NUF are not separated, the mixed “waste” radioactivity is only 1.349 Bq/g.

If left in it’s moist form, with about 35% moisture, would have an average specific activity of only 0.9 Bq/g even without dilution by blending !

♥ A RADIOACTIVITY OF 0.9 Bq/g IS FIT TO BE EATEN (IF EDIBLE) UNDER US AND EU REGULATIONS !

Looks like the pro-Lynas propaganda boys are back in action. Yawn! So predictable these guys – they flock wherever they see the faintest criticism of their beloved Lynas. They never bother to ask why Australia forbids the waste from entering their country.

The main reason why Australia refused to take back the WLP residue from Lynas is all to do with the protection of their multi-billion dollar agricultural industry.
.
The WLP after basking in hot humid tropical Malaysia will
invariably be infected with plant seeds, fungi, bacteria, viruses and other undesirable microorganisms.
.
These microorganisms can have a devastating effect on Australia’s multi-billion dollar agricultural industry.
.
When I was there a long time ago I was told that they would not allow even an apple to cross between one state and
another.
.
p.s Dear anti-propaganda, nice to see you back..as my old friend,I will not reveal your real name even though your pseudonym is really a joke!

Your … article is a worse polluter than any Lynas product. The refuse has been tested to the highest standards and after many years of successful testing, it sits as a hostage held by the handful of idiots that do not want to know the actual facts of the Lynas processing systems nor the monitoring instrumentation.
The Lynas fertilizer mix is harmless and in actual FACT equals or exceeds the quality of Malaysia’s imported phosphate fertilizer.
LET OUR REFUSE GO!

Yes, let their refuse go! Ship it back to Australia. Oops! I forgot – Australia doesn’t want their toxic waste. Oh well, never mind, just dump it on those people of Malaysia.

The Anti Lynas folks arguments are becoming more hysterical every day, it has gone past the point of stupidity.
The PH government formed an expert committee to assess lynas operations, this is on top of the many expert reviews that have been conducted by various international organisations such as the IAEA in the past, and found the Lynas Advanced Materials Plant operations are low risk and compliant with all laws and regulations.
I know I would rather listen to the experts rather than a bunch of politicians with an agenda.