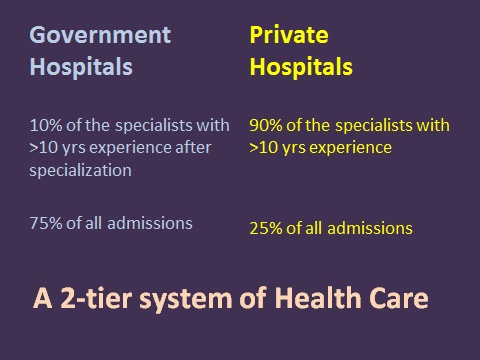 Malaysia is a good example of how not to develop a healthcare system.

Up until the 1980s, Malaysia had a strong public healthcare system. The government ran all the hospitals, except for a few run by religious charities.

But in the 1980s, the then-Prime Minister Dr Mahathir Mohamad allowed private businesses to set up hospitals. His argument was that if the rich turned to private hospitals for treatment, government funds could be used more for the have-nots who go to the government hospitals. He felt the government should not waste its money on those who could afford it.

Because of his policy, private hospitals sprang up, especially in the more affluent urban areas. And many specialists from the government sector left to join private hospitals, as they could earn five to 10 times more in the private sector. This brain drain has created a two-tier healthcare system.

About 70% of the experienced specialists are now in the private sector catering to the richest 30% of population, leaving only 30% of the specialists to look after 70% of the inpatients who get admitted to government hospitals. This has resulted in long queues and delays in treatment in the government hospitals, such that even the poorer families are forced to borrow money to seek timely treatment in private hospitals.

This is why the Socialist Party of Malaysia (PSM) as well as the Peoples’ Health Forum has been advocating a moratorium on new private hospitals. Every time a new private hospital is opened, more public sector specialists are enticed out to the private sector.

We are also lobbying for a larger budgetary allocation for the public health sector. Currently, the Ministry of Health only gets 2.1% of gross domestic product (GDP) per year. We want this to be pushed up to 4% of GDP. We need extra funds to build more government hospitals as the existing ones are badly overcrowded. We also need more healthcare staff such as doctors, nurses and community health workers.

But this is going to be a tough fight. Like many other governments, the Malaysian government has budgetary constraints. It is scared of raising taxes on the super-rich and large corporations as the government fears that these large corporations will move their headquarters to Singapore or Bangkok and shift their profits there as the tax rates there are lower. The liberalised financial system makes that very easy to do.

This is why the Peoples’ Health Movements across the world have to link up with fair taxation initiatives. Ultimately, it is all to do with how the wealth that we collectively create is being apportioned. Right now, too much of it is going to the top 1% and too little is being used to create social protection for the 99%.

This is not acceptable! A better, fairer world is possible. Together we shall build a better future for the 99%. – thinkleft.net 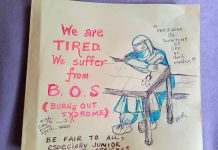 Rubbish, please name a government run department that have ever been run efficiently.

I agree that we must allocate more funds to public health and not spare the rich by taxing them too little.

Dear Doctor, you have addressed a reality that pins the vast majority of Malaysians mercilessly. But how many people realize that rather than burn a foreign country’s flag in response to a political drumbeat they should be ever more concerned about the state of healthcare for them? Until and unless that happens, we are doomed. I do not see any other MP or political party speaking up.