Safety procedures, training and risk assessment alone will not be able to resolve safety issues at the workplace, says Ronald Benjamin.

We welcome the proposed amendments to the Occupational Safety and Health Act 1994 by the Ministry of Human Resources.

This comes in the wake of a number of fatal accidents in the construction sector. Under proposed amendments, the maximum fine for the offence, which is currently RM50,000, will be raised significantly.

The amendments, which are set to be tabled in March, will also hold project owners and designers responsible for construction safety and health, alongside employers and main contractors.

It is hoped that the proposal, if it materialises, would compel project owners, designers, employers and main contractors to work in a coordinated way to ensure safety rules are adhered to.

While the proposed amendments are positive, there are missing links on safety standards that need to be addressed. Currently, there is too much focus on systems and penalties with less attention to human factors.

Having been a safety officer for ten years in the manufacturing sector, I have come across accidents that have nothing to do with system failures, but are caused by psychological and physiological stress.

For example, when I did an investigation on two veteran employees who lost part of their fingers in machine rollers at a manufacturing plant, they told me they were extremely stressed, tired and thirsty.

I have come across workers who sustained serious injuries as they wanted to finish work as fast as possible and ended up using inappropriate methods.

Safety procedures, training and risk assessment alone will not be able to resolve safety issues. Technological devices such as sensors may been needed to detect physical movements that may signal a risk.

I read that a worker at a grocery distribution facility in New York strapped a sensor under his chest. As he lugged heavy packs around the warehouse, the device tracked how he moved. It found that he was at risk of serious injury because of how much stress he was putting on his spine. The worker met with his manager, and together they came up with a solution: the worker was given a hook to help with his lugging so he wouldn’t have to bend over as much.

This example shows how safety rules and measures, complemented by technological devices that are effective in monitoring physical movements, can prevent injuries. These sensors could be used for workers in high-risk situations such as construction and manufacturing plants. 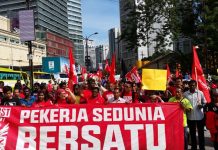