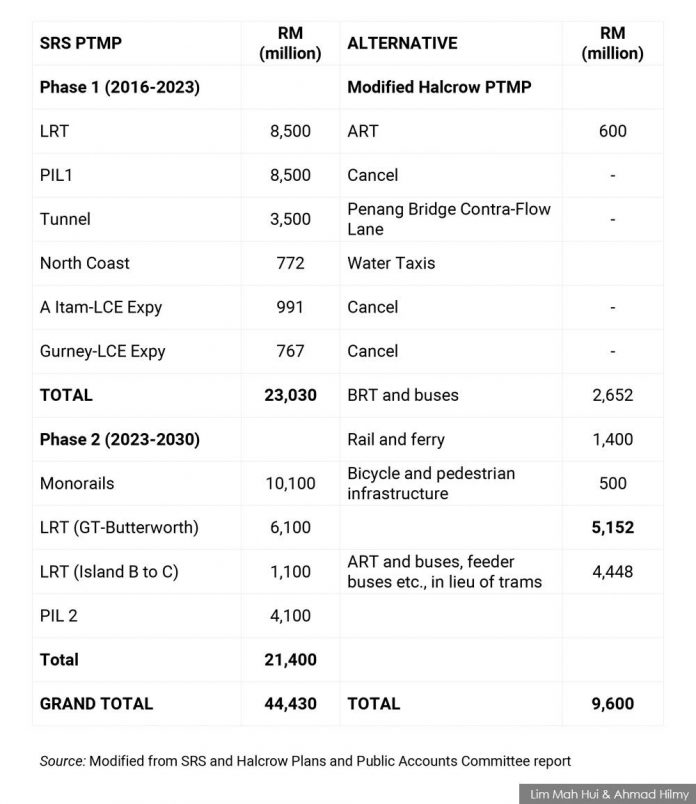 Lim Mah Hui and Ahmad Hilmy show how an integrated public transport system covering the entire state can be built for a fraction of the cost..

A fully-integrated public transport system based on a modification of the Halcrow masterplan can be implemented at less than RM10bn in place of the overblown RM46bn “Penang Transport Master Plan” (PTMP).

What is the alternative?

The alternative is to revisit the Halcrow consultants’ masterplan with the introduction of minor modifications.

Halcrow’s three-volume study over 18 months offers a detailed description of the public transport systems with capital expenditure, as well as operating and maintenance costs.

One commuter rail from Pinang Tunggal to Nibong Tebal

The table below shows the cost of public transport by type of system and by expenditure:

The total estimated cost is RM9.7bn:

The public transport system would have:

There is no capital cost for the 285 buses as Rapid Penang already owns and operates about 300 buses. The annual operating and maintenance costs for the public transport system is RM386m.

The fleet of buses, ferries and commuter trains can now be expanded unlike previously when they were under the Barisan Nasional government.

With the above information, we can now compare what the Halcrow masterplan offers to what SRS Consortium’s proposal offers.

In short, the cost of building one elevated light rail route (most recent cost RM10bn) or one Pan Island Link 1 highway (most recent cost RM9.6bn), which would run parallel in direction to the light rail line, is the same price of providing an integrated public transport system for almost the entire Penang state (RM9.6bn).

Phase 1 alone of the SRS and Zenith package would cost RM23bn, and the only public transport system in that package is the single elevated light rail line. All of this money is spent on Penang island, with nothing for the mainland.

Secondly, technology has changed significantly. We have today a better, cheaper and faster alternative as with the autonomous rail rapid transit (ART or trackless trams) system.

The three major tram lines in the Halcrow Plan (60km in length) would cost RM5.4bn. Today it is possible to build these three lines for RM1.5bn using the ART technology (taking the higher estimate of RM24m per km).

Taking into account these two major developments, we propose a modified Halcrow plan as an alternative:

Under this alternative, PIL1 and the Zenith package (including the cross-channel tunnel) would be cancelled.

In place of the “North Coast Paired Road”, we propose coastal water taxis. The elevated light rail and monorails would be replaced with ART.

There is room and budget to introduce more feeder buses, cycling and pedestrian infrastructure – and to improve first and last-mile connectivity. The cost would still be under RM10bn.

A good network of ART and BRT, supported by feeder systems to tackle first and last-mile connectivity. It is easy to run BRT or ART on major arterial roads. Providing a good feeder system is the challenging part. We need to be creative here. Bring back mini-buses, Go-Jeks, park-and-ride bicycles and e-hailing services. Get the private sector to do part of this.

Bus-high occupancy vehicle lanes to be introduced along the first Penang Bridge. Similar lanes can be tried out in major arterial roads on the island and mainland during peak hours.

Water taxis should be developed to connect the northern and southern parts of the island to George Town – from Queensbay Mall in the south to town, and from Batu Ferringhi in the north to town. If this is well developed, there is no need for the “North Coast Paired Road” (under the Zenith package).

Invest more in cycling and pedestrian infrastructure. Only in the last three years, Singapore has taken this concept seriously and made good strides in this direction. We can learn from them.

The first thing to do is to commission a serious master plan for cycling. To overcome two major factors working against bicycling (heat and safety), plant more shady trees along roads and provide safe bicycle lanes. Contra-flow bicycle lanes are used successfully in many cities.

Strict enforcement of traffic rules: a major part of Penang’s traffic jams is due to illegal parking and poor enforcement by local authorities. This is particularly acute near schools during school closing hours.

This can be solved by the partial ‘privatisation’ of enforcement, such as commissioning private operators to tow cars but under the strict control and supervision of local councils.

Balanced and sustainable development: the state has consistently talked about balanced development between the island and mainland. The Penang Development Corp has about 4,500 acres of land on the mainland.

This is a great opportunity to put that policy into practice. The state should focus on developing Batu Kawan and other neighbouring sites into the second hitech industrial zone of Penang. This new industrial zone is only 15 minutes to the island using the second Penang bridge.

Our back-of-envelope estimation of the cost of these alternatives is below RM10bn. So where would the money come from?

It will come from savings from cancelling the Zenith projects, the sale of Sungai Nibong land owned by the state, and federal funding.

The Penang government needs to request RM2.6bn – not RM10bn or RM20bn – from the federal government to address its transport woes.