Given the draw of Penang’s rich food culture, Mustafa K Anuar talked to hawkers to find out how the heritage status has benefited them as well as the challenges they face in business.

It has been almost 10 years since George Town was accorded Unesco world heritage site status.

Given the draw of Penang’s rich food culture, The Malaysian Insight talked to hawkers to find out how the heritage status has benefited them as well as the challenges they face in business.

Located next to the Chowrasta (meaning crossroads in Urdu) market along Tamil Lane is a drinks stall run by Manaf Latif, 67, for the past 30 years. With three workers assisting him, Manaf sells drinks such as coffee and soft drinks; his specialty is ginger tea.

His stall is run 24 hours a day to cater to customers from all walks of life – from fish and vegetable traders at the adjacent wet market to office workers who drop by for a cuppa before starting work. Visitors to the iconic Chowrasta market – built in 1890 – in search of local fruits, particularly the popular nutmeg (or buah pala) of Penang also drop by his stall.

Manaf said his business has already experienced a steady flow of customers notwithstanding the heritage status of the city.

But his neighbour Abdul Azeez Seeni Muhammad, 55, who has been selling cucur udang (prawn fritters), fried tofu, fish cake, and hotdogs for the past 12 years, said business has slowed down since his stall was relocated by the city council. About nine stalls have been relocated along one side of Lorong Tamil next to the Chowrasta market since two and half years ago.

At the old spot close to busy Penang Road, Azeez said his prawn fritters stall was next to one selling coconut water, and both enjoyed brisk sales. But now, he and his only assistant have to walk back and forth to take orders at the coconut water stall.

Additionally, there isn’t enough space to place many chairs and tables; so customers have to stand in queue during peak time – unless Azeez is willing to risk the wrath of city council enforcement officers by putting chairs and tables on one half of the narrow Tamil Lane.

The stall’s manager, Ali Daud, said that the area around his stall is often thronged by local and foreign tourists who are also attracted to other houses of worship along the road, also known as Harmony Street: the Kuan Yin Temple, St George’s Church, Sri Mahamariamman Temple and Assumption Church. Customers, he added, also came to his stall after visiting the heritage sites on Acheh Street and Armenian Street to admire the street art of Lithuanian artist Ernest Zacharevic.

Acknowledging the contribution of the heritage status of the city to his business, he said that crowds swell especially during school holidays.

Ah Seng sells his fusion of lam mee and birthday noodle (Hokkien variety) in George Town. His stall is parked on the fringe of a coffee shop located at the busy junction between Siam Road and Anson Road, about 1km from the buffer zone.

He said he gets his passion for cooking from observing and helping his mother. The 64-year-old has had no formal training, but he got some assistance and inspiration from the late culinary arts maestro Lim Bian Yam.

Ah Seng said Lim once gave him a nyonya cook book, which was inscribed with the phrase that became his culinary philosophy: “Cook with passion, serve with sincerity, eat with gratitude.”

Ah Seng said the city’s heritage status has not really affected his business as most of his clientele are locals, especially those who also patronise the nearby Anson Road wet market.

For Izahar Ali, who sells coconut shake and other drinks from his food truck, getting a strategic location to park his truck is an important factor. When The Malaysian Insight met him, the Perak-born was stationed at one corner of Armenian Street, where Zacharevic’s street art has become a crowd-puller.

Generally, there is a steady stream of customers, the 56-year-old said, but business usually peaks on weekends. On Saturday, he joins the night market along Armenian Street that attracts a huge crowd. The heritage status does not have much impact on his business because, he said, it is mostly locals who patronise his stall while only a few foreign tourists do, particularly from Japan, South Korea and Vietnam. 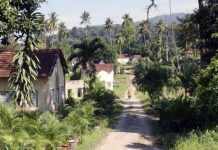 David vs Goliath – MPPP and Boustead