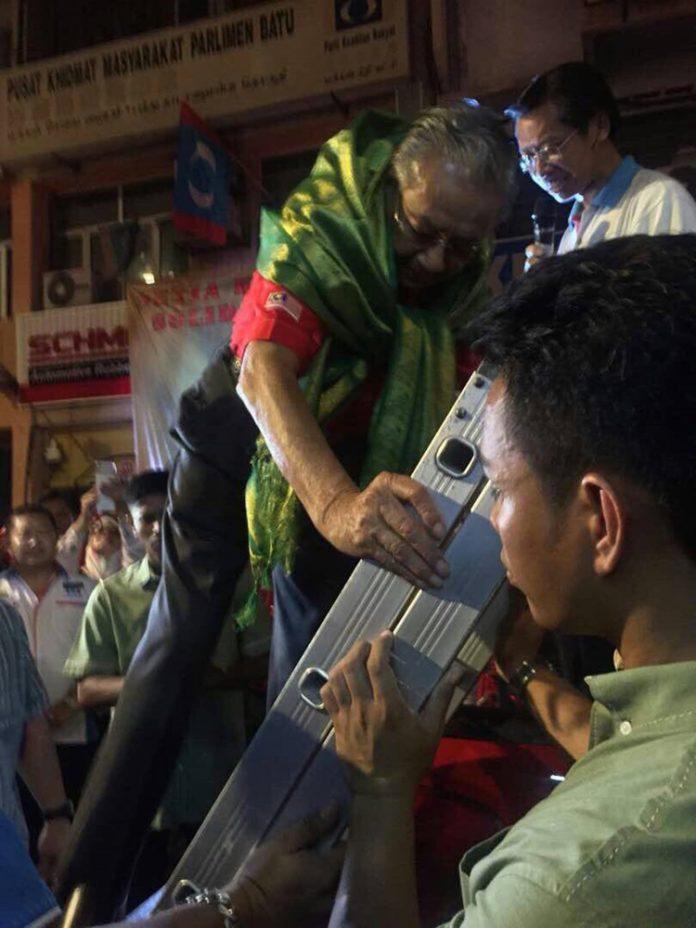 Is it far-fetched to think that the wisdom which comes with age came to Mahathir as an epiphany, writes Khoo Boo Teik.

Dr Mahathir Mohamad and Anwar Ibrahim had their historic meeting on 5 September 2016.

Since then, much has been written on their reconciliation, Pakatan Harapan’s formation, and Mahathir’s nomination as prime minister if the opposition wins the coming general election.

About Mahathir’s political return, we now know many things except the puzzle that is the man himself, around whom an amazing turn of events revolves.

We can tackle the puzzle by raising two questions: what is the underlying motif of his intervention? What are his deep personal motivations for fighting Najib Abdul Razak and the Umno-BN regime?

Looking back, it seems surreal that all the opposition’s roads lead to Mahathir.

Amanah leaders, such as Mohamad Sabu and Salahuddin Ayub, are confident that Pakatan Harapan’s nomination of Mahathir as ‘prime minister-in-waiting’ shattered Umno’s propaganda that an Umno defeat would mean “Chinese DAP domination”.

Mahathir has brought many advantages to the Harapan side. But his unsuspected value lies in his persona of a saviour. Historical circumstances and his exertions conferred that upon him.

He was involved in the anti-Malayan Union movement that Malays regarded as the definitive event in saving Tanah Melayu and the special position of the Malays from colonial perfidy and immigrant domination.

As a young doctor, he built up a good reputation for treating the sick, an esteemed way of saving lives. As was “Dr Umno”, he was an ideologue for the mission of saving the ‘Malay race’ from poverty and economic backwardness.

Abdul Razak Hussein co-opted Mahathir for his project to recover Umno’s pre-eminence that was battered in the May 1969 elections. In 1988, Mahathir ‘saved’ the deregistered Umno by forming Umno Baru.

He risked his own political survival to rescue the national economy in two crises. In 1986 he “held the New Economic Policy in abeyance”, one reason for Team B’s challenge to his leadership of Umno. In 1998 he imposed capital controls against economic orthodoxy and international condemnation.

In Menghadapi Cabaran (The Challenge), a book he wrote when he was the deputy prime minister, he endlessly lectured the Malays on their ‘unworthy values’, their tendency towards religious obscurantism, and their indifference to new forms of colonial subjection. It was tiresome to them but Mahathir meant to save the Malays from themselves!

One begins to see how a man with this background offers himself as a rallying point to rescue the economy from bankruptcy, the people from suffering and the nation from continued shame.

When Mahathir began talking to PKR leaders, Tian Chua said simply to me, “Ultimately Mahathir’s a nationalist.” The opposition leaders made a tacit bow before his saviour’s persona when they allied with him to fight Najib and Umno-BN.

The ruling regime’s spokespeople mocked at Mahathir. They pronounced him too old and infirm. They chided him for not relaxing with his grandchildren. Such insensitivity only raised the sincerity and value of Mahathir’s sacrifice in the public eye.

Mahathir did not act from political motives alone. He was probably driven by deep personal motivations between the 2013 general election and the exposé of the 1MDB scandal in 2015.

He was contemptuous of Abdullah Ahmad Badawi and scarcely believed that Najib would lead Umno-BN to a worse performance in 2013. For the next two years, Mahathir was preoccupied with Umno’s weaknesses.

Dreading the thought of Anwar’s eventual triumph, he went to the ridiculous extent of patronising so-called ‘Malay-first’ bodies like Ibrahim Ali’s Perkasa.

On hindsight, Mahathir pulled himself back when the 1MDB story broke across the world.

With his intelligence in different senses of the word, Mahathir grasped the reality of the Najib Razak-1MDB entanglement. He foresaw the destruction of all that he had worked for his entire life.

His 22-year premiership was imperfect but it brought successes that he valued: Malay progress, economic transformation, political stability, and, dearest to him, national dignity. We were admired abroad as an ‘Asian tiger’ before, he nostalgically told his audiences.

He found Najib’s record appalling: setbacks for Malay society and business, economic stagnation, social divisiveness and globally exposed national shame. If we are asked today where we come from, we lie that “We’re from Brunei,” he sorely joked with his audiences,

Mahathir claimed that Najib rejected advice on 1MDB and other issues. “I spoke to Najib because many people asked me to do something”, said Mahathir, “but Najib bragged that he could buy support because ‘cash is king’.”

Mahathir claimed Abdul Razak for his “idol” because of the latter’s contribution to rural development. But Razak’s son, Najib, only looked after himself, his wife, their children and their cronies. He showed not a drip of national interest, a prime minister’s ultimate sin in the eye of the ultimate nationalist.

Is it far-fetched to think that the wisdom which comes with age came to Mahathir as an epiphany? In a flash, he saw the double injustice of his treatment of two protégés who looked to him as their political father.

On one of them, Anwar, he had visited filicidal wrath. He had elevated the other, Najib, to power. The one stood for reformasi, the other was kleptocracy itself.

The rest is not hard to grasp. It was not too late for Mahathir to atone for both dreadful errors but, past 90, he had to hurry.

He publicly humbled himself to who in power made it a point not to admit a mistake. Mahathir flayed himself for misjudging Najib: “He was not even a bit like his father.”

And so, Mahathir reconciled with Anwar, apologised to him and his family for their suffering, and declared himself indebted to Anwar for accepting his leadership of Harapan.

In the ways he knew best, which he knew better than anyone else, Mahathir set out to re-enact his previous ‘destroy-and-promote’ drama. This time he would reverse the characters: he would depose Najib and he would resurrect Anwar.

From Mahathir’s lenses (without belittling Harapan negotiations), that must be the meaning of the Mahathir-Wan Azizah-Anwar sequence for the post of prime minister.

Even Mahathir cannot unilaterally determine how his new drama will end. The general election will decide that. But as always when he set his mind on a project, he put his (somewhat ailing) heart and (probably pained) soul into leading Harapan’s charge against Najib and Umno-BN.

Yet all this might have lifted a big load off his conscience, for he is unusually light-hearted at many ceramah.

A Harapan victory will be his finest hour. He can clear up many problems and allow Wan Azizah and Anwar to succeed him. He will retire after that, forever remembered for the truly noble legacy of delivering the nation from kleptocracy at his last stand.

It is a strange scenario to contemplate.

Mahathir is no more immune to hubris than other ‘patriarchs’ who cannot distinguish between their lives and those of their nations.

But if he succeeds, we will understand why that sharp and irreverent blogger, SakmongkolAK47, was awed into calling Mahathir “The man who can walk on water”.

This article first appeared in Malaysiakini.

the best prime minister ever

His last stand will be a new beginning.