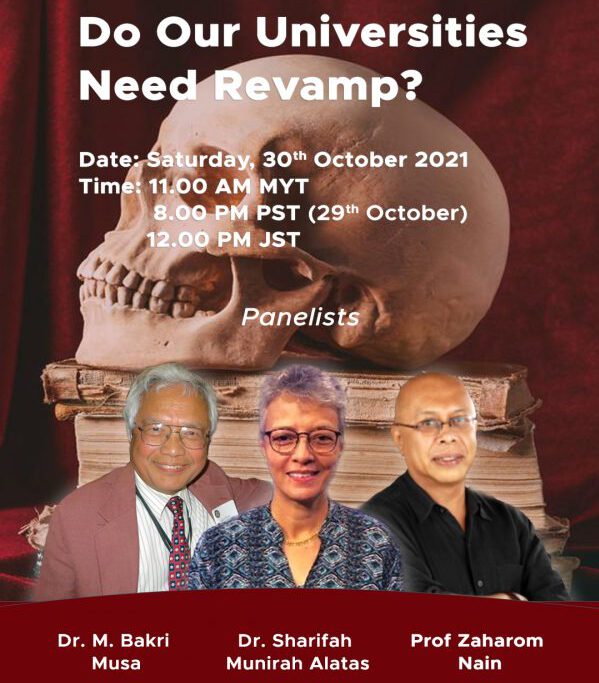 Intellectuals from both the humanities and the sciences have been lamenting the slow death of our universities. They conjure up the image of an institution convulsing in the throes of death, gasping desperately for much-needed oxygen. These enlightened scholars claim that instead of rigorously pursuing truth and excellence, many academics nowadays conveniently settle for half-truths and mediocrity – an affront to the purpose of a university education.

Academia today, the scholars concede, have bowed down enthusiastically to the god of unfettered capitalism; sadly, they have been reduced to a production line that continually churns out uncritical yet obedient workers to meet the needs of our ever-growing economy. Gone are the days when the main aim of a university was to benefit society at large. In the Malaysian context, for decades, senior academics have expressed alarm at the declining standards of our institutions of higher learning. Ironically, this has been accompanied by an aggressive campaign to promote Malaysia as an international education hub served by home-grown public and private universities, besides world-class foreign campuses.

Some of these academics argue that our higher education system is engulfed in a deepening crisis thanks to the wholesale adoption of corporate values that put a premium on output measured via a system of key performance indicators (KPIs) – a benchmark that captures an individual’s contribution to the bottom line. This results in a destructive culture characterised by selfishness, cut-throat competition and backstabbing instead of a constructive culture of sharing, collaboration and mentoring – essential elements to revitalise and pass on the legacy of ageing academics.

Other scholars decry the politicisation of the academia whereby faculty appointments and succession are based on unconditional obedience and unwavering loyalty rather than academic merit and intellectual scholarship. The consequence is tragic; it perpetuates a culture of mediocrity and injustice where incompetent academics ultimately become future leaders.

Last, but certainly not least, others find the prioritising of quantity over quality deplorable, with universities often producing unemployable graduates who lack basic critical thinking and communication skills. Not surprisingly, the latter will often join a growing army of unemployed graduates. By creating a fake demand for a university degree that many do not actually need, these scholars contend that the government is in effect creating a generation saddled with a mountain of student debt that they might never be able to repay.

Burdened with so many problems, are our universities still redeemable?