The attempt by the Umno-dominated BN government to rush the DNA Bill begs many questions, observes Tota. Despite opposition by the Opposition, whose ranks boast first-class legal brains compared to the lawyers in the government ranks, the Bar Council and legal and medical experts outside, the government exposes itself as a irrational and foolhardy one. No right-thinking Malaysian will buy the government’s claim that the timing of the Bill had nothing to do with Anwar’s Sodomy II trial.

It was my Latin teacher who generated an interest in me for law. When he extolled Roman laws, which have come down to us in the present day, he lit a flame within me which turned into a lifelong passion.

Though financial problems prevented me from pursuing a career in law, I undertook studies on my own, particularly constitutional law and the process of law-making. I began with Justinian’s Law Code and dug into famous law givers such as Asoka and Akbar the Great. I studied the great republican constitutions of the United States, France and Switzerland. These are classic examples on how the provisions enable all voices to be heard and built-in mechanisms such as the legislative select committees, which study in depth all aspects of proposed laws, vet and fine-tune them before they are gazetted. England does not have a written Constitution but it functions as a great democracy. Many of its laws lie in statute books and the laws passed by the House of Commons are fine-tuned by the House of Lords, where eminent jurists, retired politicians and eminent individuals go through proposed laws with a fine-toothed comb. Laws are never rushed through Parliament to meet any political expediency, least of all to fix a political opponent.

In Malaysia, a serious lack of brainpower within the Cabinet and among government ranks in both Houses of Parliament has resulted in laws with many flaws and loopholes. The so-called lawyers in the Cabinet are of poor quality. The previous Law Minister, Nazri, did not know that there is no Witness Protection Act in Malaysia. Worse still, he is on record as having said the separation of powers among the Executive, Legislature and Judiciary is a luxury that Malaysia cannot afford. He would do well as Mugabe’s Law Minister! Then we have another ex-Law Minister, Rais Yatim, who led a team to present Malaysia’s case to the ICJ and lost Batu Puteh! Syed Hamid is a lawyer and when you listen to his logic you realise he is a class by himself. An apparently half-past six PM made the 1988 Constitutional amendment. The mess it created for non-Malay converts to Islam is still a festering cancer – body-snatching by the Islamic Religious Department, custodial rights of children and property where one parent is a Muslim and the other not. Though the Constitution allows freedom of choice in religion, re-conversion form Islam to one’s original faith has never been allowed. Asking non-Muslims to seek redress in a Shariah Court confirms how problematic our judiciary has gotten. The suffering of all around can be better imagined than described.

In the history of the Malaysian Parliament, even a simple law requiring motor-cyclists to wear crash-helmets took a long time to be gazetted, revealing the low quality of our law makers. Malaysia is a multi-ethnic, multi-religious and multi-cultural society. Therefore, the problems encountered in law-making are also multi. The late Tun Sardon as Minister for Transport initiated this law. Certain groups – Pak Haji’s in their skullcaps and Punjabis – appealed on religious grounds and got exemption from wearing crash-helmets. In Ipoh, a Punjabi woman in a turban and riding pillion was caught by the police. She maintained rightly that the law exempted Punjabis and she was a Punjabi. A Sikh expert testified in court that Punjabi women were not required to wear turbans. The defective law was amended. The original law stated that “motorcyclists shall wear a crash helmet…” In an accident in KL the crash-helmet of a motor-cyclist flew into the air and hit a pedestrian, sending him to a hospital. The law was amended to read that motor-cyclists should wear crash-helmets and buckle them securely. This particular amendment brought much joy to the police (ahem!).

If such a simple law could turn into a comedy of errors, what more a complex and complicated law like the DNA Identification Bill with serious ramifications?

The attempt by the Umno-dominated BN government to rush the DNA Bill begs many questions. Despite opposition by the Opposition, whose ranks boast first-class legal brains compared to the lawyers in the government ranks, the Bar Council and legal and medical experts outside, the government exposes itself as a irrational and foolhardy one. No right-thinking Malaysian will buy the government’s claim that the timing of the Bill had nothing to do with Anwar’s Sodomy II trial.

“Coincidental”? So is the timing of BBC’s trip to Taiwan – “coincidental and has nothing to do with September 16. BN, be reminded that if you continue to insult the intelligence of the rakyat they will sink the BN ship sooner or later.

Are we all equal under the law? 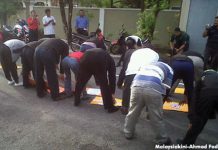