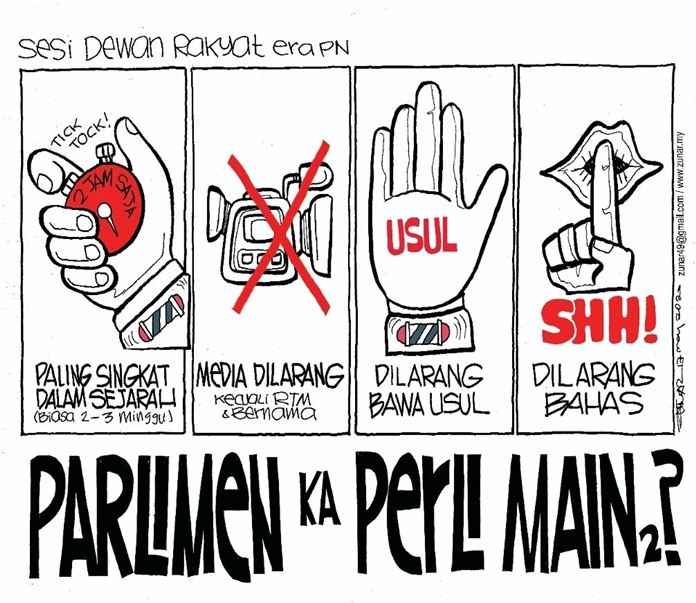 There are important questions that other media organisations will want to ask parliamentarians, Mustafa K Anuar writes.

Social distancing is a strategy to break the chain of Covid-19 infections in the country.

However, this measure should not be an excuse to curb media freedom and access to information.

Nor can we let our guard down on the importance of transparency and accountability of the government of the day where the media play an important role.

A case in point is the recent directive by Speaker Mohamad Ariff Mohd Yusof that only so-called “government media”, ie RTM and Bernama, can cover the 18 May Dewan Rakyat sitting. This means that other media organisations will not be allowed to report on the much-awaited session. This is disturbing as there is an element of unfairness and harm to democracy.

It is also tantamount to not acknowledging the legitimate role of these media organisations that represent diverse interests and concerns in our multiethnic society. The two government media organisations will have a slant to their coverage of the sitting, which often ignores other perspectives on the issues debated in the chamber.

In other words, there are important questions that other media organisations would want to ask and be answered by parliamentarians to give the public a better understanding of the issues.

This is crucial because MPs, particularly those from the government, must be made accountable for their actions and policies.

Besides, given the trust deficit that the present administration has partly because of its controversial genesis, the coverage of the parliamentary proceedings by the government media may be taken with a pinch of salt.

READ MORE:  We have to take ownership of our country and our destiny

While it is appreciated that the authorities are concerned about the health and safety of media personnel, there ought to be a commitment to provide a safe environment to accommodate the needs of all the media organisations in the country.

To reiterate, parliamentary proceedings are important as they involve issues of national import as well as the crafting of laws that affect the entire nation. Therefore, the rakyat have the inalienable right to know what transpires in the august chamber of Parliament.

For the forthcoming session, which has been postponed for a good while, the public will be eager to know what happens when Perikatan Nasional (PN) MPs face the Opposition for the first time since the “Sheraton Move”.

This is especially so when Dr Mahathir Mohamed has filed a motion of no confidence against Prime Minister Muhyiddin Yassin.

Moreover, a government that supposedly has a comfortable parliamentary majority should not be rattled by the presence of the media.

Placing certain restrictions on the media should not be the new normal following the pandemic because an erosion of media freedom is an abnormality in democracy which we can do without.

As it is, certain media organisations have not been allowed to cover certain official functions, leaving them dependent on the reporting of the official news agency, Bernama.

It really doesn’t matter if the debate in the state assembly eventually degenerated into barking exchanges that only inhabitants of the animal kingdom would appreciate. The media still have a role to inform voters and the public that they have a certain genre of politicians to endure until the next election.

In these trying times, it is important to remember that a democracy is as good as its media.