Bersih 2.0 chairman, Thomas Fann was called in by the police for questioning over a Facebook post made in February. Thomas is being investigated under the Peaceful Assembly Act for urging those unhappy with the so-called Sheraton Move to protest. Many see this as yet another instance of police intimidation of activists and journalists and a backslide on democratic rights. Astro Awani’s Melisa Idris and Sharaad Kuttan bring you the most important conversations of the day. 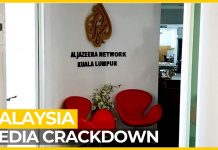 It is obvious there is pressure on dissenting views by this backdoor govt.
Malaysiakini is an obvious example that is having cold feet because of the pressure – there is no need to sugar coat what the security units of the backdoor govt, is doing.It is to stifle dissent and to intimidate those with alternative views to what that toilet bowl govt. hold.