Much has been said about the late Cardinal Soter Fernandez’s humility. But perhaps this anecdote from a local blog best summed up his disposition.

Some time ago, a priest from Malaysia went on retreat to a centre in the US.

At the beginning of the week-long retreat, each participant introduced themselves simply by name and their country of origin. No titles and job descriptions were permitted to allow for a better exchange of ideas and to emphasise fraternity for the duration of the retreat.

When he introduced himself as a priest from Malaysia, the priest was greeted by thunderous applause and treated with respect and deference. This puzzled him greatly, so the fathers enlightened him with this story.

One of the rules of the house is that a roster is drawn up and all the participants are assigned duties such as sweeping the floors, washing the dishes, setting the table and the like. Perhaps the most unpopular of these duties was of course, cleaning the toilets.

The person in charge starts asking for volunteers. First, Monday, sweeping the floors, and some hands go up. Setting the table, and more hands go up and so on. But when it comes to toilet duty, there are no volunteers until one solitary hand pops up at the back.

Then Tuesday comes, and they go through the same drill until a volunteer is again needed for toilet duty. Still no other volunteers, and again the same hand goes up. This continues for the duration of the week-long retreat on the theme humility and discipleship.

Support the struggle to build a Malaysia based on Justice, Freedom, Solidarity:
READ MORE:  Repatriation of Myanmar nationals stranded in Malaysia

Finally, at the conclusion, each participant was asked to describe his title and responsibilities and provide a full introduction.

The participants introduced themselves as vicars general, monsignori and other religious and diocesan priests. They went round the room until they reach the toilet cleaner who was of course none other than [then-]Archbishop Anthony Soter Fernandez of Kuala Lumpur.

This revelation was a great shock, to say the least, to the fathers and participants who expected the little Indian priest with a knack for cleaning toilets to be a simple vicar of a far-off parish and not a metropolitan archbishop.

It was by his example and deeds that Archbishop Soter taught them more about the retreat theme of humility and discipleship than everything else they picked up during the course.

And it was because of Archbishop Soter that the Malaysian priest received a thunderous ovation – and perhaps garnered an expectation to clean the toilets as well? 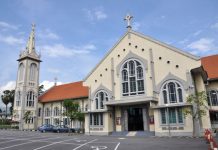 This is a wonderful story that best illustrates this man’s humility and down to earth approach to life.