Help build bridges and gain goodwill from all religious stakeholders – that would be national unity in action, Mustafa K Anuar writes.

Religion is patently important to most Malaysians, Muslims and non-Muslims alike, which is why it can become an emotive issue when religious friction prevails.

It follows that their houses of worship are also vital for religious adherents to congregate, pray and seek spiritual sustenance. These sacred places also represent their respective cultural identities, which they jealously guard.

That is why the recent destruction of Hindu temples in Kedah has become a cause for concern and anxiety, if not anger, as it can be generally deemed a sacrilegious act by the believers.

And in a diverse society like Malaysia, a religious matter can take on a political tone as well, which can be combustible if not dealt with sensitivity, mutual understanding and trust.

It is, therefore, understandable the concern raised recently by the Malaysian Consultative Council of Buddhism, Christianity, Hinduism, Sikhism and Taoism (MCCBDCHST) and the Council of Churches Malaysia (CCM) regarding National Unity Minister Halimah Mohamed Sadique’s proposal to set up a committee with the participation of local councils to detect so-called illegal temples and churches.

Halimah said she had contacted Housing and Local Government Minister Zuraida Kamaruddin about forming a committee in all the local councils to ascertain non-Muslim houses of worship.

This committee will have officers from her ministry and it will identify all the registered and non-registered non-Muslim houses of worship.

The interfaith group rightly cautioned Halimah that such measures should not be carried out unilaterally as the authorities must consult it before taking action against non-Muslim places of worship, especially given that 90% of the religious houses are supervised by the MCCBCHST.

Furthermore, as pointed out by the MCCBCHST, it is a radical change from the normal practice of the state or local councils – not the federal ministry – handling matters pertaining to places of worship of the non-Muslims.

The MCCBCHST emphasised that sensitive matters, such as places of worship, require total consultation because the problems concerned can be intricate.

In the interest of religious harmony, challenges of religious diversity in multicultural and multireligious societies, such as Malaysia, ought to be dealt with inclusively. Hence, the participation of the MCCBCHST in the discussion is duly expected.

In fact, this interfaith group should play a pivotal role in discussing its houses of worship so that the needs of its respective believers are properly and adequately addressed, and at the same time the toes of other adherents are not stepped on.

An exclusive approach towards this matter would not be able to build the much-needed trust between followers of faiths other than Islam and the Malay-Muslim-led Perikatan Nasional government, which is essential if Islam is to be rightly seen as a religion that does not discriminate against religious minorities.

We would like to assume that Halimah, as National Unity Minister, is aware that excluding religious groups, such as the MCCBCHST, in this matter is not the right recipe for fostering harmonious ethno-religious relations, especially in a social context where race and religion are often used as political fodder.

The issue of places of worship should, instead, be taken as a golden opportunity for the government to help build bridges and gain goodwill from all religious stakeholders. That would be national unity in action.

Why do attacks on places of worship go unabated? 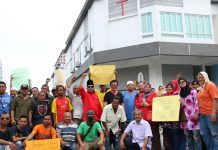 When Muslims get crossed 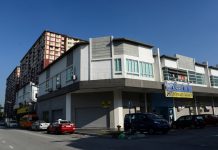 On the forcible removal of the cross at Taman Medan

“…proposal to set up a committee with the participation of local councils to detect so-called illegal temples and churches.” – granted the source of this suggestion , is it any surprise that the MCCBDCHST and the CCM have voiced concern?
At face value, I will even venture to declare it is another effort by the dominant religion of the land to suppress other religions.
Perhaps it may be interesting to know why the so-called illegal temples and churches exist in the first place?

“.. places of worship should, …. help build bridges and gain goodwill from all religious stakeholders” – thank you, Mustafa! Yes, that should be so, but the way this issue is being addressed, I doubt that is what Halimah has in mind!!!