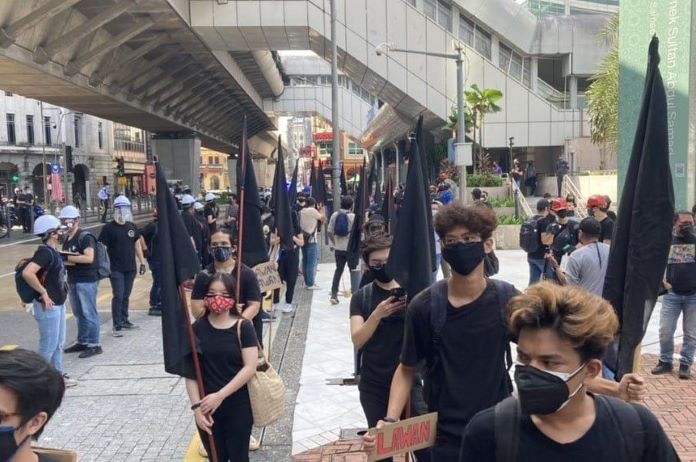 But more than that, what also radiated was youthful idealism that seeks good governance, accountability, functioning democracy, freedom and justice.

The #Lawan protest was organised by the Sekretariat Solidariti Rakyat (SSR), who demanded the resignation of embattled Prime Minister Mahiaddin Yasin, whom they felt has handled badly the Covid pandemic. Also, his steely determination to remain in power is seen to have the effect of destabilising national politics and economy.

They wanted the alleged “failed government” to be replaced by a better crop of leaders who are competent enough to effectively tackle the pandemic and resuscitate the battered economy.

Numbering in the hundreds, if not more, the young protesters of diverse ethnic and religious backgrounds waved black flags and lined a few streets leading to Dataran Merdeka while adhering to the standard operating procedures of the lockdown to avoid creating a so-called protest cluster.

The marshals among them saw to it that the march to their destination was orderly, without causing unnecessary inconvenience to the public.

Incidentally, these were young people who want to make their political preferences known at the ballot box if given the opportunity to make a political difference to our society.

Although blocked by police from reaching the desired Dataran Merdeka meeting point, their physical presence in the vicinity was enough to express their collective political stand, which also represents that of many Malaysians who could not be there for various reasons.

This despite accusations from certain quarters that the protesters knowingly risked creating a contagious cluster that would only further burden the already overstretched frontline health workers.

Their determination to stake their claim to a better society was also not broken by intimidation and the risk of receiving the full force of the law.

Prior to the protest, co-founder and secretary of MISI: Solidariti Sarah Irdina Mohammad Ariff was already subjected to police investigation under the Sedition Act 1948 and the Communications and Multimedia Act 1998, over her Twitter posts about the #Lawan protest. She claimed she was forced to strip to her underwear and then change into the custodial shirt and pants before entering her cell.

Such challenges did not deter the protesters from exercising their democratic right to express themselves in public. If some of the protesters were students or graduates of public universities, then confronting these deterrents says a lot about them.

These are students who would have undergone indoctrination of sorts by the student affairs departments of the respective universities with the aim of depoliticising them. Students are generally discouraged from acquiring political consciousness that is essential in making a critical assessment of political forces or issues in society. And yet, they soldiered on.

The immense enthusiasm of the mostly young protesters to publicly register their collective dissatisfaction was understandable, given that the future of this country is theirs. Any attempt to mess with their future by certain forces would be seen as a grave transgression of their inalienable right to a better and democratic Malaysia. – The Malaysian Insight