The hastily-organised trip to Taiwan of 50 BN MPs on a so-called study tour is mind-boggling. Malaysians could only exclaim, “Not again, not at this time!” One can only conclude that it is a very desperate attempt by the BN Umno-dominated government to ensure their political survival by sabotaging the much-speculated crossover of BN politicians to the Pakatan Rakyat on 16 September. Obviously, the earlier much-touted pledge signing was an utter failure, observes Tota.

This trip is irresponsible, thoughtless and insensitive, indeed stupid. We have a deficit budget. We are running on borrowed money. The economy is down and the KLSE provides daily confirmation of this. The petrol price hike has let loose the spiralling prices of food and other essential commodities. Can you imagine the suffering of the poor Malays in this month of Ramadan?

The government called on the rakyat to tighten its belt and economise and to be prepared for worse times ahead, citing impending world-wide recession as the reason. How uncaring of the government to organise this trip! We are told that the BBC chaps are going on this trip at their own expense. How noble of them to make this supreme sacrifice for the benefit of the nation! Not a few Barisan politicians have apparently fattened themselves through corruption, lucrative contracts, business licences, and preferential share allocations. Just one example will suffice. A MB who was kicked out on 8 March is now living in a palatial mansion – rent only RM25,000 a month. Thank you, Minister, for advising us to save foreign exchange by going on internal tours. Matta was advised to concentrate on promoting domestic tours rather than overseas ones. And now we have this trip – leadership by example of its best kind! Obviously, what is good for the Umno goose is not good for the rakyat gander!

Many moons ago, many such lawatan sambil belajar were organised before Projek Majuternak was implemented by agricultural experts in the Agriculture Ministry. Many were exploratory trips overseas for the purchase of high-yielding New Zealand and Jersey cows. Billions were spent. The aim – to provide fresh milk to the population, especially undernourished schoolchildren – soon dried up like the udders of neglected cows. When Musa Hitam realised that there were more idling officers in the Majuternak Project than cows, he signed an executive order cancelling the project! Now we are told that MPs who do not know the difference between ball and bat about agriculture are going to return from Taiwan with great agricultural expertise to turn our ruined agriculture around. The public may even get to see a “bocor” in the head and a “tunnel hunter” standing proudly in a Taiwanese pig-sty giving the thumbs-up sign.

I met a Malay friend of mine with whom I once worked at a local university and, among other things, talked about this lawatan sambil belajar. His cynical comment, “What can you expect when kerbaus go to great lengths to study about kerbaus!” is worth reflecting on. 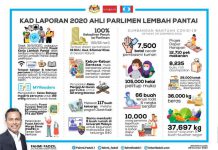