Should branches of political parties be allowed in public universities? Mustafa K Anuar speaks to a few academics to find out what they think.

The difference in opinion between Education Minister Maszlee Malik and Prime Minister Dr Mahathir Mohamad over the issue of establishing political party branches in public universities has rattled academics for various reasons.

The issue has turned contentious, not only because it was proposed by Maszlee, who is a Bersatu member, but because a branch of that party was established in Universiti Kebangsaan Malaysia in October.

This was not the first time that a minister and the prime minister have come up with conflicting ideas, senior lecturer Dr Khoo Ying Hooi of Universiti Malaya told The Malaysian Insight.

“I do not know how the system operates at the cabinet level but looking at this within a larger context, such conflicting statements should be reduced, especially when it comes to major decisions like this (the idea of establishing political parties in campus),” she said.

Such conflicting ideas create problems for those at the execution level, she said. “That then might lead to the inconsistency of the policies and eventually the failure in execution and implementation.”

Prof Zaharom Nain of Nottingham University Malaysia concurs with Khoo: “This anarchic system of each minister making his or her own decisions – especially major ones like this and not minor ones like the colour of school shoes – is not advisable.

“It’s not about seeking the permission of the PM. It’s about the spirit of making major decisions, like this, with some consultation and consensus.

“So, what are ‘major’ decisions and what are not? If ministers don’t know the answer to that, then we have a problem.”

Dr Ngo Sheau Shi of Universiti Sains Malaysia said in a democratic society, differences of opinion should be allowed, while the decision-making process should involve consultation with all stakeholders, such as students and lecturers.

Regarding conflicting decisions at the ministerial level, she said the minister should have the prerogative to come out with new policies within his portfolio. “However, if there is a clear conflict of ideas as such, then, maybe the issue needs to be discussed in a cabinet meeting.”

A lecturer with a private university in Kuala Lumpur, who prefers to remain anonymous, is more forgiving: “I see this as a new cabinet thrown together for the first time.”

“I know both men come from the same party and there will be teething problems working out policies. I will give them a bit more time to get their act together.”

For academic Dr Azmil Tayeb of Universiti Sains Malaysia, the differing views regarding political freedom on campus is testimony to the fact that both are the products of their time. “Lest we forget, the Universities and University Colleges Act was Dr Mahathir’s brainchild when he was the education minister at the time of the draconian law’s conception. His idea then and now is ‘depoliticisation’ of the campus.

“The only difference is in pre-GE14, the campus was depoliticised only for opposition parties and critics of the government, not BN and its cheerleaders.

“In post-GE14, it’s difficult to see how a campus can be depoliticised, scrubbed clean of any ‘political element’ and to have that practice jive with the newfound freedom on campus. It’s contradictory at best and patronising at worst.”

He hoped that Maszlee could hold his ground and would not buckle under the pressure of Mahathir, “who is still living in the authoritarian past where political freedom and discourses on campus can be suppressed”.

With the dawn of a new Malaysia, he said, university students are fully aware of their political rights and the main issues that are plaguing the country. “There is no stopping the students from discussing and debating these issues on campus, the ideal venue for such discourse to take place.

“Moreover, the voting age will soon be lowered to 18 and thus keeping politics out of campus full of first-time voters is simply inane and futile,” he added.

Zaharom, however, disagrees, saying it was a bad idea to have political party branches in campuses. “Have ideological organisations instead,” he said, “like a socialist society that encourage learning and understanding of political movements and ideologies. Not party recruitment and propagating branches.”

The university’s role is to encourage thinking, learning and understanding, he said.

On 1 November, Mahathir said he had reservations about allowing political parties to set up branches in public universities. “You are free to talk as you like, but tak payah lah bagi (there is no need to allow it),” he said.

Maszlee was earlier reported to have said in the Dewan Rakyat that political parties would be allowed to set up branches in all public universities. 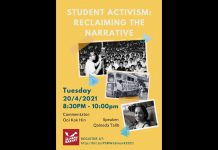