The book by the non-governmental organisation titled Regime Change in Malaysia: 60 Years of UMNO-BN Rule End discusses key issues surrounding the 2018 election and includes research on women, youth and ethnic voting patterns and other factors which brought the Pakatan Harapan (PH) coalition into power.

The book’s co-editor and former Aliran president Francis Loh said the book enables readers to reflect on what had been achieved by the people in the election and the peaceful transition of power.

“The book is not just a record of the whole transition of what we went through, but gave us a chance to reflect on what we have done,” Loh told the media at the launch of the book at Gerakbudaya’s bookstore here yesterday.

“This is because have achieved a lot by bringing about a peaceful transition to a new government. What is also important is that we have people from the different races that cooperate in the transition.

“However there are still major issues such as electoral and economic reforms that need to be done.”

The book comprises 40 chapters from some 30 writers including political analysts, academics, political observers and youth. It is published by Gerakbudaya and edited by Francis and Anil Netto.

The book can be purchased at the Gerakbudaya bookstore [and other leading bookshops] for RM45 and Aliran’s office in Penang. [It may also be ordered online via the Gerakbudaya website]. 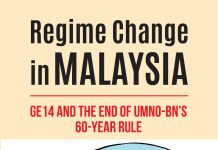