Horse-trading, calls for snap elections, the most dramatic budget vote in our nation’s history, a state of emergency—all against the backdrop of a global health and economic crisis.

One year since Prime Minister Muhyiddin Yassin was sworn into office, his Perikatan Nasional government has had to tackle multiple public policy challenges with a weak parliamentary majority – a majority more MPs from both sides of the political divide are questioning.

BFM speaks to Setiawangsa MP Nik Nazmi Nik Ahmad and political commentator Bridget Welsh, research associate with the University of Nottingham’s Asia Research University on how the government has navigated these challenges and how well it’s performed. 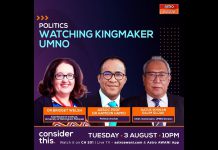 The kingmaker in this political quagmire?

As the nation reels in misery, has Umno lost the plot?

My apologies to Nik Nazmi and Bridget for not hearing them out before commenting.
I have been a Malaysiakini subscriber for years until August last year. I disagreed with its editorial policy of yanking a whole comment over an offending word like a**emin. To me, the editors are running yellow after been charged for contempt of court.
The fine, imposed at the end, shows to me, that despite how cowardly the editors have became, the authorities still want to close down Mkini!!

What is one subscriber to Mkini? Of course it matters not. But, to me, this is the greatest achievement of the PN after one year in power. PN has managed to bring Mkini to heel!!