Michael Mann spoke to ABC News channel about Australia’s unprecedented bushfire disaster and what he calls climate inaction by the Morrison government.

Climatologist Michael Mann has been one of the leading voices over the past two decades in the effort by scientists to raise the alarm about climate change. He was a lead author in the 2001 Intergovernmental Panel on Climate Change report and has written four books on climate change. 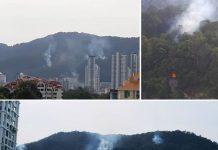 It may not be only Australia but also several other countries including materialistic developed countries like USA whose policies to make USA GREAT at any cost are perceived to be based on greed for wealth and power but whose rich and leaders deny that their policies may also be adversely impacting their lives of their own most vulnerable.citizens.
Lack of remedial policies on climate change was also highlighted by some candidates for next USA presidency during the recent debate of USA Democrats aired on CNN.
GREED FOR POWER AND WEALTH MAKES LEADERSHIP BLIND TO THE DANGERS OF THEIR SELF-CENTERED POLICIES.