The plan to allow export-oriented manufacturing firms to employ an entirely migrant workforce contradicts the 11thh Malaysia Plan plan to reduce the number of migrant workers to 15% of workers, writes Rani Rasiah.

The government’s decision to allow 100% employment of migrant workers by ‘export-oriented’ manufacturing companies is alarming.

Has the government thought through the impact of such a move on the local workforce, whose bargaining power is already badly weakened by the presence of a six million-strong migrant workforce that is cheaper and expectedly more compliant?

Difficulty in getting factory jobs is already a reality for many Malaysians in the B20 (Bottom 20%) stratum of our society. Factories prefer migrant workers who are prepared to work longer hours and who are much less likely to complain about infringements of labour laws.

The expectations of migrant workers inevitably match the unabated hardship back home which drives them to leave behind loved ones, community and country for a strange land to earn a living for their families.

Don’t Malaysian workers have the right to expect more? Or at least enough to meet the rising cost of living and more time for family and community? Is a living wage for eight hours of factory work too much to ask for?

It is unacceptable that the government tries to justify the 100% migrant workers policy for the manufacturing sector with the claim that locals shun ‘production-line jobs’. It has been pointed out time and again that about half a million Malaysians work in Singapore as blue-collar workers because they are able to earn more.

From the perspective of migrant workers too, there is much that needs to be set right before deciding to increase the migrant workforce. Labour migration in Malaysia is plagued by huge problems, and our constant low rankings (barring the last one) in the Trafficking in Persons annual report are testimony to that.

A persistent and unresolved problem, exacerbated by the absence of the basic right to redress, is that of undocumented workers who comprise about 70% of the migrant workforce in the country. They have no legal status and cannot avail themselves of any protection or labour rights. They live in constant fear of harassment, extortion and arrest by enforcement officials.

Their presence in such overwhelming numbers depresses the wage floor for unskilled casual work and has a negative impact on all workers. This situation needs to be set right urgently as do a host of other problems related to labour rights, social security, housing, and healthcare for migrant workers.

We also urgently need a comprehensive policy on labour migration to guide decisions which currently seem to be greatly influenced by private interests. The private agencies that bring in migrant labour by the thousands make about RM10,000 from each migrant worker they bring in. This is why they will be more than happy with the government’s decision to allow a 100% migrant workforce for certain manufacturing industries.

Decisions have been made on important areas such as healthcare access that are potentially harmful to the entire population and that can be seen by the rise in cases of tuberculosis from 10,000 new cases per year in 1990 to more than 25,000 cases last year. Prior to 1990, the incidence of tuberculosis in Malaysia was slowly but steadily going down. It is now increasing at quite an alarming rate.

This 100% migrant worker announcement is another ad hoc decision, coming as suddenly as it did, and it contradicts the strategy laid out in the 11th Malaysia Plan to reduce the number of migrant workers to 15% of the total workforce by 2020. Was it thought through properly? Were the “stakeholders” consulted? Or was it a spur-of-the-moment decision taken to benefit some sectors of the Malaysian elite?

The government needs to stop and honestly review its decision. 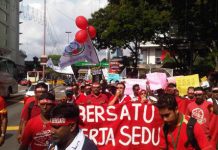