The 91-year-old Siti Hasmah may yet sway fence-sitters, especially women voters, in the months to come, writes Anil Netto.

While her spouse Dr Mahathir Mohamad was no stranger to controversy and criticism during his 22 years in power, Siti Hasmah Mohamad Ali herself always projected a sense of quiet dignity which perhaps was only appreciated in hindsight.

She was even underappreciated or ignored when Mahathir’s popularity nosedived during Operation Lalang, the 1988 judicial crisis and the post-Reformasi years. Even so, most people won’t be able to remember any occasion when she acted out of place in a way that embarrassed Mahathir when he was prime minister or contributed to his sliding popularity at the time.

Given the less-than-edifying turn in Malaysian politics in recent years, Siti Hasmah’s recent public appearances serve to remind us of her graceful though active public role behind the scenes in various welfare projects when Mahathir helmed the nation.

If anything, the Klang-born Siti Hasmah’s dignified presence at Mahathir’s side in his latest reinvention has helped to soften the jarring memories of his autocratic rule. It has aided in the rebooting and rehabilitation process of the one-time ‘mahafiraun’, turning him into the man who has taken over the imprisoned Anwar’s mantle as the flag-bearer of many Malaysians’ aspiration for change.

Certainly, Siti Hasmah’s gentle, graceful demeanour has made it somewhat easier for many to forgive or overlook the former premier’s past excesses – even if he hasn’t actually said sorry, which does seem to be the hardest word. (Still not too late, Mahathir. Just say it – especially to the ex-ISA detainees – like you mean it.) She had maintained a dignified silence, content to play a supportive role when she accompanied Mahathir to Bersih rallies and Bersatu ceramahs.

Until now. The Woman Against Toxic Politics rally presented the perfect occasion for Siti Hasmah to rise to the occasion and finally speak out for the first time – putting herself firmly in the public eye. And the medical graduate from the University of Malaya in Singapore did so in her own assured way, her gentle tone barely masking a quiet resolve, winning herself new admirers in the process.

As daughter Marina Mahathir pointed out below, she hardly put a foot wrong.

So while Najib had his coveted meeting with Trump in Washington – it is the 91-year-old Siti Hasmah who may yet sway fence-sitters, especially women voters, in the months to come – and that could be the difference between victory and defeat for Malaysia’s opposition parties. 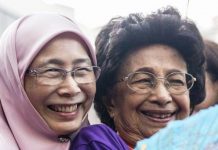 Congrats Aliran Team, excellent analysis and updates on current issues, and we need to make changes for the better. Aliran – Good Change agent for a better future.

A Trump card perhaps for the opposition?

Wish she won’t b drag into politics 4 she is too dignify but that if she is the catalyst for change…..life