Widely cited projections suggest modest GDP gains after ten years, varying from less than half a percentage point for the United States to 13 percent for Vietnam. However, these projections are based on unrealistic assumptions such as full employment and constant income distribution.

This GDAE Working Paper employs a more realistic model that incorporates effects on employment excluded from prior TPP modeling. We find that any benefits to economic growth are more limited, and even negative in some countries such as the United States. More importantly, we find that TPP would lead to losses in employment and increases in inequality.

This is particularly true for the United States, where GDP is projected to fall slightly (-0.54 per cent), employment to decline by 448,000 jobs, and inequality to increase as labour’s share of income falls by 1.31 per cent.

For this analysis, we use existing projections of the TPP’s trade impacts and derive alternative macroeconomic projections using the United Nations Global Policy Model (GPM). This model provides more realistic projections because it allows for changes in employment and inequality, and also incorporates the impact such changes have on aggregate demand and economic growth.

In this analysis of the TPP, we find that:

• The TPP would generate net GDP losses in the USA and Japan. For the USA, GDP would be 0.54 per cent lower than it would be without the TPP, ten years after the treaty enters into force. We also project that Japan’s GDP would decrease by 0.12 per cent as a consequence.

• The TPP would lead to employment losses in all countries, totaling 771,000 lost jobs. The USA would be the hardest hit, with a loss of 448,000 jobs. Participating developing economies would also suffer employment losses, as greater competitive pressures force them to limit labour incomes and increase production for export.

• The TPP would lead to higher inequality, with a lower labour share of national income. We expect competitive pressures on labour incomes, combined with employment losses, to push labour shares of national income further down, redistributing income from labour to capital in all countries. In the USA, this would exacerbate a multi-decade downward trend.

These projections are largely the result of two changes in TPP economies.

These projections should help TPP signatory countries and others assess the full range of economic impacts of the agreement before ratifying it. 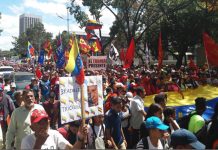