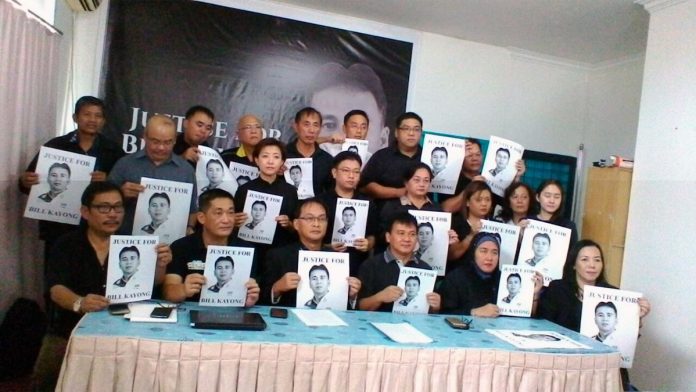 The 21 June assassination of Bill Kayong must not be allowed to become yet another unsolved case in Sarawak police files, says Baru Bian.

We are extremely concerned at the level of violence that has crept into our society against politicians and social activists. To find the motive, the police must look at Bill’s activities as a member of PKR and Pedas, which have been widely shared on social media and reported in the press. Bill’s death may be linked to these two facets of his life.

Bill was a well-known politician and stood as a PKR candidate in Bekenu during the recent Sarawak election. He was also well known as Miri MP Dr Michael Teo’s political secretary.

As Pedas secretary, Bill was active in the defence of native land rights and often stood up for longhouse residents against encroachment by timber and plantation companies.

Threats against politicians, lawyers and activists are real, especially for those who speak up against land encroachment.

Last year, Dr Michael Teo was assaulted and seriously injured in front of his office by an assailant. But the case was never solved and no one was brought to justice for the crime.

A few years ago, a Molotov cocktail was thrown into the compound of See Chee How’s house by an unknown thug.

Bill had reportedly received calls warning him not to get involved in land cases. Chee How, Abun Sui and I have also received such calls.

The police and the Sarawak government must not remain inactive over the violence related to NCR land cases.

In Melikin, Surik Muntai, who was fighting for his land rights, was viciously attacked and crippled by gangsters in 2013. One of the assailants was identified as a worker for the politically connected plantation company in the area. Despite the police discovering a stash of weapons at the workers’ quarters, to date, there has been no justice for Surik. No one has been held accountable for this crime.

In Bekelit, TR Jambai has been fighting for his land since 2008. In that time, he has had his house and car burnt, and he was beaten and slashed with a samurai sword last year. The plantation company that is involved is also connected to powerful persons, and again, no one has been brought to justice for the crimes against TR Jambai.

In fact, the latest incident that Bill Kayong was involved in was at Bekelit in April, where there was a confrontation between the villagers and the assistant manager of the plantation, who was accompanied by plainclothes police officers and immigration officers.

There have been countless police reports lodged over these two cases. But the police are remarkably unconcerned about making arrests and filing charges. Is it any wonder that the public has lost confidence in the local police? Whether it is true or not, the public perception is that they are compromised.

For this reason, we welcome the inspector general of police’s announcement that a special taskforce has been formed to investigate Bill’s murder. We request that no local police officers be involved as far as possible, to give the perception of independence.

The shooting of Bill Kayong is not just another random shooting. The police must not discount political involvement. In any case, the government must relook at their policies and practices of issuing timber licences and provisional leases, which have caused much unhappiness and hardship to the natives.

The problems arising from these policies – corporate greed, corruption and contempt for native rights – are the reason that people like Bill Kayong and the rest of us carry on fighting for the landowners against the companies and the government.

As an urgent measure and to prevent further violence and loss of life, the government must immediately look for a viable and effective process for quick resolution of all NCR disputes.

Chief Judge of Sabah and Sarawak Richard Malanjum had proposed that a Land Commission be set up, and we again voice our support for his proposal. I call upon the chief minister to act upon this suggestion immediately.

We must not let Bill’s struggle and his ultimate sacrifice be in vain.