Adrian Lee hopes for a rakyat-friendly budget that would help us cope with rising living costs.

The nation awaits with bated breath the unveiling of the national budget tomorrow.

Billions of ringgit are expected to be spent in boosting economic growth, attracting foreign investors, and constructing roads, buildings, hospitals and defence infrastructure.

We will also be informed of the health of the economy. A robust economy promising greater wealth for all Malaysians is truly desired.

The wealth of the nation ought to be shared with everyone, irrespective of class and social standing, to ensure comfortable living standards for all.

Taxpayers appreciate it when their hard earned ringgit is put to good use and spent wisely in developing infrastructure, healthcare, the economy, education and safety.

The rakyat also have the right to demand safer and better living standards and improvements in access to good education and healthcare. It is the government that is accountable for delivering such necessities to the rakyat.

We have thus placed our trust in the government to ensure that election campaign promises and pledges are implemented throughout the length of the given mandate.

The yardstick in gauging the effectiveness of governance is through a healthy economy, a safe environment, steady employment, and political accountability and stability.

For these to be achieved, we need greater freedom of expression, media freedom, and strong and independent democratic institutions such as the judiciary, the press and the police. Concerted efforts must be made to plug the leakages caused by endemic corruption.

During the budget announcement, terms such as GDP, Q1 or Q3, trade deficits, fiscal discipline and future orientation index are bandied about. These terms, however, are foreign to me.

I am nonetheless familiar with the terms recession, inflation, rising living costs, poverty and unemployment. These terms with negative economic connotations have effects and consequences felt by the rakyat.

As an ordinary rakyat, I do not yearn or desire French labels or Italian designer outfits that cost the price of a car. Neither do I long for jet-setting shopping sprees or posh makeovers costing more than the non-existent minimum wage.

I am not one for impulsive shopping, and I don’t yearn for a pompous lifestyle far beyond my financial capabilities. Put simply, I cannot afford it.

The balance of my salary at the end of the month becomes my gauge of the economy’s strength. My economic terms are namely “think again and again before buying”, “do I really need this?”, “cannot afford”, “maybe next time”, “which item is on discount?” or “I’d go bankrupt soon”.

I leave the grocery store with a much lighter load than before, but these trips are heavier on my credit card bills as the prices of essentials continue rising. I need to book flight tickets and hotel rooms 12 months in advance during the sales period before making my dream vacation to Bali.

I need to “think again and again and again before buying” the “poor man’s meal” aka instant noodles that now costs between RM4 and RM15. Even the prices of baby formula and diapers have soared.

The prices of houses, cars, utilities, education and clothing have also steadily increased. Eating in restaurants and cafes is now a luxury. Eating out at street hawkers isn’t that much cheaper. Basically, everything is now so expensive.

So what do I, a normal rakyat, want from the 2016 budget? Personally, I’d want a budget that:

Tunku Abdul Rahman visualised a nation that guaranteed “liberty, security, prosperity and happiness for the future”. But as national debt and the debts of the ordinary rakyat rise, we don’t want to become a nation of “kais pagi makan pagi, kais petang makan petang” and go hungry at night as we head towards developed nation status.

My requests are simple: I’m not asking for a pompous and luxurious lifestyle. I am just part of the ordinary rakyat, someone who genuinely hopes that the budget will help me cope with budget cuts at work, fluctuating petrol prices, and the rise in the post-GST prices of groceries and other essential items. I hope for safer cars, a reduction or the abolition of highway tolls, and truly affordable housing in a safer Malaysia. 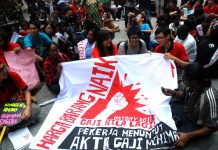