Malaysians proved consistently throughout this tragic episode how far they would go to reach out to perfect strangers, observes Zaharom Nain.

Were it not for the internet and social media, I doubt many of us would have come anywhere near to visualising – let alone understanding – the devastation and the human haemorrhage that this year’s floods on the East Coast caused.

And were it not for the golden-hearted Malaysian donors and volunteers … I suspect that the death toll from this man-made disaster would have been much higher.

As one Malaysian paper put it, this has been “the worst disaster in recent history”…

Indeed, with some 250,000 Malaysians made homeless, however temporary, and the rain coming back for a second battering, suddenly all that talk about Vision 2020 and a `developed’ nation seemed so distant, so empty.

Nonetheless, for many, the almost unprecedented way Malaysian citizens responded to the disaster illustrates that, fortunately, the Vision 2020 idea of a caring society is very much alive.

Thousands contributed to our neighbours on the East Coast. Food, clothing and temporary shelters were collected and transported by land and by air to those suffering in these East Coast states.

Individuals such as Syed Azmi Alhabshi – yes, the same Syed Azmi who was undeservingly vilified for his pat-a-dog event – and his Skuad Tamak Pahala channelled their almost inexhaustible energies towards reducing the pain and trauma.

Stories of other selfless individuals, such as Facebook friends David Wu and Mujahidin Zulkifli, warm the cockles of the heart.

Just before the new year, these two, who’d never met before, in a moment of madness decided to drive to Kelantan in David’s car, not as sick-in-the-head disaster tourists, but to actually get down and dirty.

Their ‘plan’, for want of a better term, was to get to the flooded areas, assess the situation on the ground with the help of local volunteers and, with the assistance and guidance of these locals, purchase and distribute necessities for those suffering.

And it was a plan that appeared to have worked out quite well for them and those they have helped.They received thousands of ringgit, donated by virtual strangers from Malaysia and further afield.

After returning to Kuala Lumpur to recharge their batteries just after the new year, they headed back – in David’s Mercedes convertible – for another round of providing aid and comfort to fellow Malaysians, keeping us updated via Facebook.

Malaysians proved consistently throughout this tragic episode how much they are willing to sacrifice, how far they would go to reach out to perfect strangers.

In stark contrast, leadership from the government clearly has been lacking.

From the initial images of Prime Minister Datuk Seri Najib Razak engaging in ‘golf diplomacy’ when the East Coast was flooded, to accounts of local ‘Hitlers’ denying aid from opposition parties for the suffering, right to the ghastly photographs of politicians plastered on bags of rice meant for the flood victims, this human tragedy turned out to be one big public relations disaster for politicians, especially those in Umno.

While the essential services – the army, the police, medical personnel, and fire and rescue services – sprung into action, unfortunately (and perhaps predictably) government leaders either acted like utter ninnies, were derelict in their duties, or just shamelessly attempted to project themselves.

It was quite disingenuous, even stupid, for some of these ‘leaders’ to put the disaster down to “an act of God” or “God’s wrath”. It was as if they were laying the blame at God’s door, arrogantly implying that they were privy to God’s intentions.

In doing so, the role played by human greed and even corruption was conveniently brushed aside.

Deforestation, for example, was clearly one of the probable causes. As one news report put it: “Total loss of forests through deforestation amounting to an area roughly larger than Denmark was among the factors that contributed to the worst flood disaster in Malaysia’s history.”

It is the reluctance by leaders to critically and substantially address the real issues, their inability to lead that many Malaysians find galling, especially when tens of thousands of lives are affected.

And the statement released by no less than Najib himself – about the government drawing up within the next six months a new SOP (standard operating procedure) to tackle major floods – doesn’t reduce the frustration, the anger.

For many, this statement was illustrative of a government that is reactive, not proactive.

Floods, especially in the East Coast states, have been a perennial occurrence. So, what sort of SOP is in existence that another needs to be designed for major floods?

Pray tell, what constitutes a major flood as opposed to a minor one?

Indeed, given the unpreparedness, the confusion, has there really been a viable SOP in place all this while? 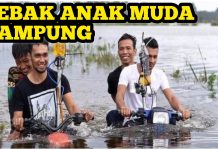