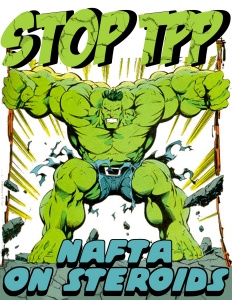 The TPP is part of the inexorable march by corporations to wrest from us the ability to use government to defend the public, says Chris Hedges.

The release on 5 November 2015 of the 5,544-page text of the Trans-Pacific Partnership—a trade and investment agreement involving 12 countries comprising nearly 40 percent of global output—confirms what even its most apocalyptic critics feared.

“The TPP, along with the WTO [World Trade Organisation] and Nafta [North American Free Trade Agreement], is the most brazen corporate power grab in American history,” Ralph Nader told me when I reached him by phone in Washington, DC.

“It allows corporations to bypass our three branches of government to impose enforceable sanctions by secret tribunals. These tribunals can declare our labour, consumer and environmental protections [to be] unlawful, non-tariff barriers subject to fines for noncompliance. The TPP establishes a transnational, autocratic system of enforceable governance in defiance of our domestic laws.”

The TPP is part of a triad of trade agreements that includes the Transatlantic Trade and Investment Partnership (TTIP) and the Trade in Services Agreement (TiSA).

TiSA, by calling for the privatisation of all public services, is a mortal threat to the viability of the US Postal Service, public education and other government-run enterprises and utilities; together these operations make up 80 per cent of the US economy.

The TTIP and TiSA are still in the negotiation phase. They will follow on the heels of the TPP and are likely to go before Congress in 2017.

These three agreements solidify the creeping corporate coup d’état along with the final evisceration of national sovereignty. Citizens will be forced to give up control of their destiny and will be stripped of the ability to protect themselves from corporate predators, safeguard the ecosystem and find redress and justice in our now anemic and often dysfunctional democratic institutions.

The TPP removes legislative authority from Congress and the White House on a range of issues. Judicial power is often surrendered to three-person trade tribunals in which only corporations are permitted to sue. Workers, environmental and advocacy groups and labour unions are blocked from seeking redress in the proposed tribunals. The rights of corporations become sacrosanct. The rights of citizens are abolished.

The Sierra Club issued a statement after the release of the TPP text saying that the “deal is rife with polluter giveaways that would undermine decades of environmental progress, threaten our climate, and fail to adequately protect wildlife because big polluters helped write the deal.”

If there is no sustained popular uprising to prevent the passage of the TPP in Congress this spring we will be shackled by corporate power.

Wages will decline. Working conditions will deteriorate. Unemployment will rise. Our few remaining rights will be revoked.

The assault on the ecosystem will be accelerated.

Banks and global speculation will be beyond oversight or control.

Food safety standards and regulations will be jettisoned.

Public services ranging from Medicare and Medicaid to the post office and public education will be abolished or dramatically slashed and taken over by for-profit corporations.

Prices for basic commodities, including pharmaceuticals, will skyrocket.

Social assistance programmes will be drastically scaled back or terminated.

And countries that have public health care systems, such as Canada and Australia, that are in the agreement will probably see their public health systems collapse under corporate assault.

Corporations will be empowered to hold a wide variety of patents, including over plants and animals, turning basic necessities and the natural world into marketable products.

And, just to make sure corporations extract every pound of flesh, any public law interpreted by corporations as impeding projected profit, even a law designed to protect the environment or consumers, will be subject to challenge in an entity called the investor-state dispute settlement (ISDS) section.

The ISDS, bolstered and expanded under the TPP, will see corporations paid massive sums in compensation from offending governments for impeding their “right” to further swell their bank accounts. Corporate profit effectively will replace the common good.

Given the bankruptcy of our political class—including amoral politicians such as Hillary Clinton, who is denouncing the TPP during the presidential campaign but whose unwavering service to corporate capitalism assures her fealty to her corporate backers—the trade agreement has a good chance of becoming law.

And because the Obama administration won fast-track authority, a tactic designed by the Nixon administration to subvert democratic debate, President Obama will be able to sign the agreement before it goes to Congress.

The TPP, because of fast track, bypasses the normal legislative process of public discussion and consideration by congressional committees. The House and the Senate, which have to vote on the TPP bill within 90 days of when it is sent to Congress, are prohibited by the fast-track provision from adding floor amendments or holding more than 20 hours of floor debate.

Congress cannot raise concerns about the effects of the TPP on the environment. It can only vote yes or no. It is powerless to modify or change one word.

There will be a mass mobilisation on 14-18 November in Washington to begin the push to block the TPP. Rising up to stop the TPP is a far, far better investment of our time and energy than engaging in the empty political theatre that passes for a presidential campaign.

“The TPP creates a web of corporate laws that will dominate the global economy,” attorney Kevin Zeese of the group Popular Resistance, which has mounted a long fight against the trade agreement, told me from Baltimore by telephone.

“It is a global corporate coup d’état. Corporations will become more powerful than countries. Corporations will force democratic systems to serve their interests. Civil courts around the world will be replaced with corporate courts or so-called trade tribunals. This is a massive expansion that builds on the worst of Nafta rather than what Barack Obama promised, which was to get rid of the worst aspects of Nafta.”

The agreement is the product of six years of work by global capitalists from banks, insurance companies, Goldman Sachs, Monsanto and other corporations.

“It was written by them [the corporations], it is for them and it will serve them,” Zeese said of the TPP. “It will hurt domestic businesses and small businesses. The buy-American provisions will disappear. Local communities will not be allowed to build buy-local campaigns.

“The thrust of the agreement is the privatisation and commodification of everything. The agreement has built within it a deep antipathy to state-supported or state-owned enterprises. It gives away what is left of our democracy to the World Trade Organisation.”

The economist David Rosnick, in a report on the TPP by the Centre for Economic and Policy Research (CEPR), estimated that under the trade agreement only the top 10 per cent of US workers would see their wages increase. Rosnick wrote that the real wages of middle-income U.S. workers (from the 35th percentile to the 80th percentile) would decline under the TPP.

Nafta, contributing to a decline in manufacturing jobs (now only 9 per cent of the economy), has forced workers into lower-paying service jobs and resulted in a decline in real wages of between 12 and 17 per cent. The TPP would only accelerate this process, Rosnick concluded.

“This is a continuation of the global race to the bottom,” Dr Margaret Flowers, also from Popular Resistance and a candidate for the US Senate, said from Baltimore in a telephone conversation with me.

“Corporations are free to move to countries that have the lowest labour standards. This drives down high labour standards here. It means a decimation of industries and unions. It means an accelerated race to the bottom, which we must rise up to stop.”

“In Malaysia, one third of tech workers are essentially slaves,” Zeese said. “In Vietnam the minimum wage is 35 cents an hour. Once these countries are part of the trade agreement, US workers are put in a very difficult position.”

Fifty-one percent of working Americans now make less than $30,000 a year, a new study by the Social Security Administration reported. Forty per cent are making less than $20,000 a year. The federal government considers a family of four living on an income of less than $24,250 to be in poverty.

The assault on the American workforce by Nafta—which was established under the Clinton administration in 1994 and which at the time promised creation of 200,000 net jobs a year in the United States—has been devastating.

Nafta has led to a $181bn trade deficit with Mexico and Canada and the loss of at least 1m US jobs, according to a report by Public Citizen. The flooding of the Mexican market with cheap corn by US agro-businesses drove down the price of Mexican corn and saw 1m to 3m poor Mexican farmers go bankrupt and lose their small farms. Many of them crossed the border into the United States in a desperate effort to find work.

“This agreement [the TPP] is sold to us with the same deceits that were used to sell us Nafta and other trade agreements.”

The agreement, in essence, becomes global law. Any agreements over carbon emissions by countries made through the United Nations are effectively rendered null and void by the TPP.

“Trade agreements are binding,” Flowers said. “They supersede any of the nonbinding agreements made by the United Nations Climate Change Conference that might come out of Paris.”

There is more than enough evidence from past trade agreements to indicate where the TPP—often called “Nafta on steroids”—will lead. It is part of the inexorable march by corporations to wrest from us the ability to use government to defend the public and to build social and political organisations that promote the common good.

Our corporate masters seek to turn the natural world and human beings into malleable commodities that will be used and exploited until exhaustion or collapse. Trade agreements are the tools being used to achieve this subjugation. The only response left is open, sustained and defiant popular revolt.

Chris Hedges, a Pulitzer Prize-winning reporter, writes a regular column for Truthdig every Monday. Hedges’ most recent book is “Wages of Rebellion: The Moral Imperative of Revolt.”