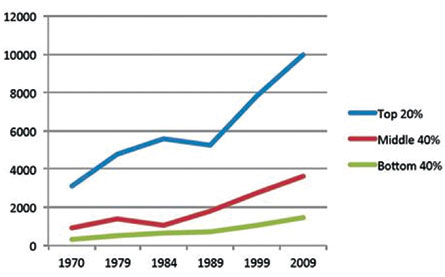 We are fast heading towards a divided Malaysia – not so much by religion or ethnicity as we are being constantly reminded, but by income and wealth distribution, observes Wandering Malaysian.

Abdul Taib Mahmud, the former chief minister of Sarawak (1981-2014), has never appeared on any international wealth ranking list. Yet according to the Bloomberg Billionaires Index, he presides over a family fortune exceeding US$1bn.

But he is in good company. The total wealth of the richest 40 Malaysians (you don’t need me to list them, just Google) is equivalent to 22 per cent of Malaysia’s total GDP and their share has been increasing continuously. In relative terms, these fine gentlemen (unfortunately there are no women yet amongst their ranks) are in fact much wealthier than the top 40 richest individuals from the US.

I can rattle off more boring statistics that pretty much all tell the same story. Malaysia has a problem of persistent income and wealth inequality that will affect its long term growth prospects unless specific measures are taken.

Despite overall household incomes increasing on average, the relative income gap between the top 20 per cent (rich) and the bottom 40 per cent (poor) has remain stuck at 7.0 since 1990. The relative income gap between rural and urban households in 2012 is the same as at independence in 1957! The richest state in Malaysia has about three times more income than the poorest state.

This is of course not to say that there has been no progress. Incomes have increased overall, but the rich are getting richer faster than the poor are getting less poor, irrespective of ethnicity. Some states have progressed while others are languishing. Rural households are at risk of being left behind.

We need new policies in place to address the growing gap between the rich and the poor. We are fast heading towards a divided Malaysia – not so much by religion or ethnicity as we are being constantly reminded, but by income and wealth distribution and the accompanying access to power and opportunitie – unless the government gives everyone a hand up without pushing others down or out and making sure no one gets left behind.

READ MORE:  Living together in pursuit of Malaysia