What we need are intelligent, competent leaders to carry the torch of pluralism to secure a place in the sun for all Malaysians, says Choo Sing Chye.

Let us break free from the shackles of hate, and make 2015 a year to rekindle our hopes of goodwill and harmony in Malaysia.

We have forgotten the feelings of brotherhood and sisterhood which had been residing in our hearts many decades ago.

It is a known fact that the hate-peddlers dwell comfortably in Umno’s ironic One-Malaysia home. We have weak and unintelligent leaders in Umno to begin with, and because of this, they are unable to provide an effectual injunction against these hate-peddler’s misdemeanours.

Their lack of intelligence and political will have left a large patch of fertile ground for this consortium of hate-peddlers, yelling right-wingers, thugs and the pseudo-intelligentsia to flourish and expand.

In short, these hate-peddlers dominate everything from influence-peddling to national debate. They even dictate the vocabulary of Human Rights, Democracy, Pluralism and Liberalism.

Pluralism, like Liberalism is neither a fatalistic nor a sinister philosophical/political idea; it just needs a keen mind to comprehend, and decode its significance so that it can be applied effectively to our society in the form of good policies.

But, with our tiny-minded politicians and activists dominating the mainstream debate, throwing an ideology like Pluralism into the ring would in an instance hurl them into a violent epileptic fit.

What many do not know is that Pluralism is the key to our political survival, and it forms the back-bone of our society whether we like it or not. In fact, the Barisan Nasional and the Pakatan Rakyat are fashioned towardd diversity incorporating several different ethnic political parties under its wings, vying to become the government of the day.

Pluralism held on well during the preliminary years after Merdeka. Tunku Abdul Rahman, the first Prime Minister, continued with the British federalist policy of governing Malaya/Malaysia. But sadly, almost 12 years later, the May 13 riots broke out, and it sent the country into an uncontrollable spiral, as it entered one of the bleakest episodes in our history. This was the day Pluralism stopped working.

Yes, Pluralism literally died on that day. The Malays and the Chinese were at each other’s throats, and hatred for each other reigned that day. No more neighbourly or brotherly love – just pure hatred.

It was Tun Abdul Razak and Tun Dr Ismail who resuscitated Pluralism when they reinstated Parliament and moulded the Rukun Negara into the Malaysian consciousness.

Today, Pluralism has fallen into disrespect and has been torn into tatters by the yelling hate-peddlers. Unintelligently, these acts are being cheered on by none other than our Barisan Nasional’s future and present leaders, notably from Umno.

Now, why is the real meaning of Pluralism not in our national debate or in our consciousness anymore?

It is crystal clear that these unintelligent hate-peddlers have misplaced the correct meaning of Pluralism. They seem to focus entirely on the presumption that Pluralism has a hegemonic value attached to it.

They refuse and in most cases are unable to think intelligently. They infer that our society with different sets of values is made equal and forcibly moulded together into one gigantic Super-Valued Pluralism (1, Value Pluralism). By this, they insist and believe that Islam is placed at an equal footing with other religions.

This is pure nonsense, because in reality, Pluralism cannot be super-valued into one huge entity where everything is forcibly made equal. Islam cannot be reduced in value to be made equal to other religions. It simply cannot be done!

The Malaysian Constitution is a federalist document, and not a ‘super-valued’ one. It positions Islam eminently as the religion of the Federation (official religion), and it is placed under the domain of the Malay Rulers, while non-Muslims are given space to freely practise their religion in the Federation.

Umno’s politicians and the yelling hate-peddlers shouldn’t have fallen into these hostile and antagonistic trappings. They have all the highly paid consultants, government-owned media practitioners, public university professors; and yet, they can’t even understand the correct meaning of Pluralism.

In fact, Umno, having all these advantages, would have easily sailed through explaining the significance of having a thriving pluralistic culture in our society. But the opposite is true: none of their scornful, thoughtless, nasty and silly speeches reflects the correct meaning of Pluralism.

As a consequence, things that are good can be made bad with a twist of the yelling hate-peddlers’ tongues. Let us take a hypothetical example: even the simplest meaning like ‘swearing’ can be misplaced and manipulated.

To prove a point, the word swearing can be banned from our courts if these hate-peddlers bypass their brains and jump in a haste to believe this syllogistic layout: “Swearing is forbidden by God; swearing is practised in our Courts of Justice; therefore something practised in our Courts of Justice is forbidden by God.” So, should it be removed from our court’s system?

This is a simple hypothetical example to illustrate what can happen to a term when its meaning is not comprehended, and misplaced by us, just like Pluralism.

Thus, what we need today are intelligent and competent leaders to carry the torch of pluralism/diversity to secure a place in the sun for all Malaysians – but sadly this is not the case.

Undeniably, it is an insurmountable task to correct the consortium of hate peddler’s perceptions. But fortunately, we have the Group of 20 plus 11 coming out into the open to voice this concern. This has definitely offered us a small glimmer of hope against this consortium of haters.

I hope this group and others will flourish throughout 2015 and beyond.

Fatwa on liberalism, pluralism: Application for leave at Federal Court 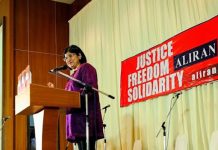