There should not be a ‘Malaysian first’ or ‘Malaysian last’. Wherever our starting point is, we should always arrive at the same finishing point, says Nicholas Chan.

The Malaysia Day celebrations once again prompted us to ponder the question: what does it mean to be Malaysian?

Before someone gets into a panic mode about this “identity crisis” we are facing, let me assure you that this is not an issue unique to Malaysia. Post-colonial societies often have a hard time finding and agreeing on a national identity.

Even as Singapore celebrated its 50th anniversary with worldwide applause as an economic miracle, the question of what it means to be Singaporean is still as hazy as the air is.

The United States, the ideological state, as my professor puts it, has also seen efforts to redefine or reaffirm “American values”, most notably through the brusqueness of Trump-ism and Bernie Sander’s alleged far-left socialism, a heresy according to many in the Republican camp.

‘Malaysian first’ not without paradoxes

That said, it is not particularly helpful when the word “Malaysian” is turned into an advertisement cliché, with images of children from different racial groups playing in the background.

However, the reality of racial segregation means the vision is leagues away and most will find it hard to relate to.

Nor is it so when the term has been bastardised in the highly racialised “who’s more Malaysian” debate.

Consider this irony because the intention of the popular discourse of “being Malaysian” is to urge people to place less emphasis on their ethno-religious identity in favour of their nationality.

To be Malaysian, free from the clutches of blind loyalty towards ethno-cultural markers. That seems like a noble project to strive for, but it is not free of challenges or contradictions.

For starters, no one can live being completely uprooted from his or her cultural identity. Identities are forged by the heritage of customs, values, kinship and an emotional sense of belonging.

For many Malaysians living in racially segregated circles, our social life is interwoven with our cultural identities. Even if we can proudly espouse that we are ‘Malaysian first’, deep down, most of us are not immune to the feeling of disappointment as we have failed to live up to the standards expected of a ‘melting pot’.

But if to conform to ‘Malaysian first’ is to sever some of our ties and heritage, which part of it should we forget? And should some people slough off more of their cultural identity than the rest because they are not “indigenous”?

In this age of greater migration, these are pertinent questions.

What about ‘Muslim first’ or ‘global citizen first’?

And then there is the question of transnational values and identities, brought about by globalisation, the post-World War Two idea of universal human rights and religious revivalism.

National identities matter less to the globe-trotter who sees its significance as being the cover of his passport or to those who aspire to be a part of a larger community, such as the ummah for the Muslims.

The issue then is, can one really be faulted just for wanting to be more than a Malaysian? If that is true, are all identities exclusive and hierarchical in nature?

For example, there is a strong emerging pattern among Muslims in the world to see themselves as ‘Muslim first’ as compared with their national identity.

However, to turn it into a problem means there is something mutually exclusive between being Muslim and being a Malaysian.

Well, the matter is more black and white if let’s say, a Malaysian chooses to join a transnational terrorist organisation.

But what if the person is someone God-fearing, peace-loving and morally responsible? Would it be wrong for someone to affirm his religious identity first because that is what he deems his highest priority of life is?

Even for one who is as secular as I am, the same dilemma can happen. What if I see myself as being humanist first and refuse to let artificial constructs, such as borders and cultures, affect my judgement and emotions?

These are not lofty ideals or theoretical debates. The question was put to the test when Malaysia was contemplating whether to take in the Rohingyas stranded in the sea or not.

Many ‘Malaysian first’ champions, in fact, showed reservations towards accepting these ill-fated refugees.

To be honest, I don’t claim to have the answers to all the questions posed above. The only takeaway lesson here is that constructions of ‘national identity’ will forever be contested and revised as a result.

And this is where I think the democratic value of being Malaysian is underappreciated.

It is full of setbacks but principally, we are still practising democracy. In other words, that means there will always be majority and minority views, not just about what being a Malaysian means, but practically everything. Not only that, people will constantly move from majority views to minority ones, or vice versa.

And we will fight over these differences, and as long as we remain a democracy, the tussle will never be over.

This is where I think it is important for us to reaffirm our Malaysian identity. Aside from this particular sameness, this point of reference, we have nothing which allows us to stand above our differences, our priorities, and our self-identity.

We have nothing else to tell us that after a good day’s argument, we remain the same. That is, we are all Malaysians. And we are equally so.

You can argue you are more Chinese or Malay or Penangite than me. But you cannot be more Malaysian than me. Being Malaysian is not a race. There should not be a ‘Malaysian first’ or ‘Malaysian last’. Wherever our starting point is, we should always arrive at the same finishing point.

And until we decide our loyalties belong to another country, we will be equally, unflinchingly and democratically Malaysian. 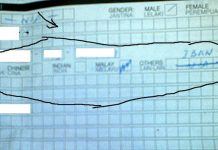