Many unassuming individuals fall for this heavily romanticised fallacy that also ‘promises’ some level of excitement and sense of adventure, observes Syerleena Abdul Rashid.

According to Jamil Khir Baharom, who is in charge of Islamic Affairs, women who join IS are often lonely and fragile. “Lonely women who can’t sleep at night will stay awake and be online on their Facebook. They are still online on Facebook at 2.00am or 3.00am”.

His remarks only provide an extremely oversimplified generalisation and are not coherent enough to provide the solution our government needs to combat the rapid ‘radicalisation’ of Malaysian men and women.

Radicalisation is a process where individuals embrace extreme socio-political and religious ideologies. They become enthralled by a dangerous idea; consequently, these individuals will downright reject any notion of freedom, social justice and human rights that is understood in our progressive world.

The International Centre for the Study of Radicalisation, an organisation based in the UK, has identified three main reasons why some women may be inspired to join: the alleged oppression of Muslim people, a desire to establish an ideologically pure Islamic state, and a sense of personal religious duty to facilitate this process.

Even though some of the recruits may experience some level of culture shock — as they are thrust into a very different environment and made to live in a social structure that is incredibly misogynistic, the level of radicalisation they have experienced allows them to part with their families and leave the comforts of their homes. This kind of reckless abandonment is dangerous to democracy.

Reports estimate that about 550 women from western countries have travelled to Isis-controlled territories. So far, in Malaysia, 173 Malaysians have been arrested for joining IS and the youngest recruit (to date) was a 14-year-old girl. Past reports also emphasise the possibility of these numbers being higher as many other recruits have not been detected or may have simply ‘fallen of the grid’.

IS has gained quite a reputation for being internet savvy and skilled at spreading its radicalised version of religion through social media. Potential recruits are motivated by the romantic idea of fighting for a divine cause and by a desire to rectify the wrongdoings brought upon by Western civilisation. Hence, many unassuming individuals fall for this heavily romanticised fallacy that also ‘promises’ some level of excitement and sense of adventure.

The reasons that individuals join IS vary from one case to another; each case is highly complicated and has more to do with radicalisation than the quest for love, unlike what Jamil Khir Baharom insinuated in his statement (“Women who felt empty, alone and lonely, and decided to join the Isis militants, might end up falling in love”).

The threat of IS is real and the atrocities committed against women, men and even young children are repulsive. Therefore, it is only in our country’s best interest that those in power refrain from making chauvinist statements that alienate and demean women. Sweeping statements that provide very little practicality and lack prudence are also incredibly hurtful to the families that are affected by these recruitments.

Do we really need to be declared an Islamic state to live like good Muslims? 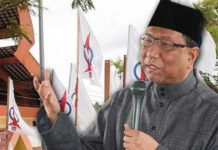