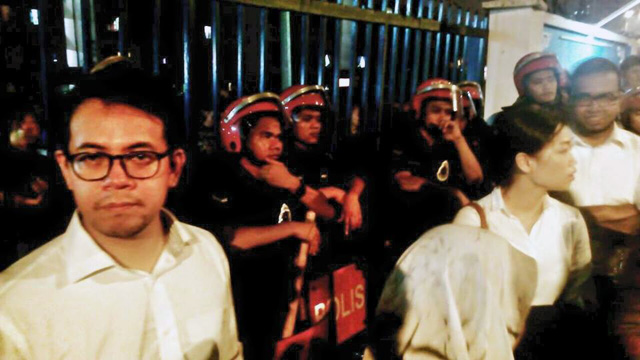 Steven Sim describes his experience during a vigil at the Kelana Jaya Police Station for those arrested during an anti-GST sit-in at the PJ Customs complex earlier that day.

Many of you called and wrote me on the news that I was beaten by police during a peaceful vigil on Monday, 23 March. I’m sorry for not being able to answer every message sent, but I am overwhelmed with gratitude for your concern and love.

I am fine now, although the bruise is still there. And some functions of my handphone are damaged. On the advice of my lawyers, I have also lodged a police report the very next day.

I just want to say that I’m very angry at what happened. I was not trying to be heroic, and far from it that I was looking for trouble.

I was just trying to disperse the tension, standing in between the crowd and the police. I made it clear from the beginning of the vigil that I am a Member of Parliament, and my colleagues and I were there to manage the situation so that it wouldn’t turn ugly.

But when I saw the Light Strike Force police charging and agitating the crowd, I quickly moved into the middle, in between them to keep both sides away from each other.

I thought MPs would at least command some respect from the police. But I was wrong, the police kept charging even though I told them to stop and keep away. It was then that I was beaten by a police with baton.

I did not make laws in Parliament for the police to act as such.

I did not endorse the laws of the jungle which I saw in force that evening.

I did not vote for laws which deny detainees of legal representation as happened that evening which led to the peaceful vigil in the first place.

I did not approve our tax money to go into brutality against Malaysians who assembled peacefully to demand justice.

Thank you for your prayers and well-wishes. Continue to pray, we need it so so much.

Steven Sim is the MP for Bukit Mertajam.

PDRM is doing their usual best at suppressing dissent.

Where is the rule of law? Police supposed to keep peace but instead (going after) beating up defenceless people. What is this country becoming?