The government is projecting a higher output to the economy despite a lower input, points out Steven Sim.

I have highlighted earlier that Prime Minister Najib Razak’s 11th Malaysia Plan was fundamentally flawed because it was built on misguided assumptions on household income, employment data and other economic indicators.

11MP will be fueled by more government spending

Government spending is expected to increase in the period of 11MP. In the pipeline are mega projects such as highways including the Pan Borneo Highway, transit systems, flood mitigation projects, housing projects, and other infrastructures such as a regional sewage facility in Perak, and the Pengerang oil and gas G project.

While the Prime Minister projected a 5-6 per cent GDP growth in the coming five years, civil service emoluments are expected to grow at a rate of 6.7 per cent. This is another indication of the bigger government we can expect under the 11MP.

Will all these be feasible?

They will only be feasible if government revenue is strong, and the government of course projects a higher revenue in the 11MP. But such a projection is totally unrealistic due to three factors: reduced profits for Petronas, lower GST collection and lower income tax than projected.

As the oil and gas industry faces a historic slowdown, Petronas recorded a 39 per cent lower net profit in the first quarter of this year compared to 2014. The government expects a 10 per cent reduction in Petronas dividend this year. Although sizeable, the reduction is unrealistic if Petronas continues to suffer a 40-50 per cent reduction in profit towards the end of the year due to the halving of the benchmark crude price.

In April this year, Petronas started a cost reduction exercise with its contractors which included a salary reduction of up to 20 per cent. If the situation persists and the government is still squeezing high dividenda from Petronas, the company may soon have to downsize its own operational staff.

GST collection will not be optimum

Due to the shock of introducing GST at 6 per cent, consumer consumption slowed in the months following April 2015 Analyst reports estimated a 20-50 per cent slowdown after GST was implemented. As such, the government has to be prepared for a less-than-optimum collection of GST revenue.

With the weaker ringgit and higher prices in certain consumer markets, consumption will also be affected. Again, this will contribute towards a lower GST revenue than projected.

The only way the government can get around this is to encourage debt-financed spending behaviour in the consumer market – which will be detrimental to the people given the already soaring household debt.

With an average monthly income today of RM2,000 and 50 per cent  of Malaysian workers earning below RM1,500 monthly (Statistics Department, August 2014), such a projection of income tax collection is unrealistic when taxable income begins above RM4,000.

In order to squeeze the most out of the current tax base, the government may resort to massive witch-hunting for tax evaders. The fear  is of course the victimisation of small companies and the working class.

It is obvious that 11MP is a house built of cards. The government is projecting a higher output to the economy despite a lower input.

Not only has he failed to inspire Malaysians to be excited about this crucial five-year plan, which will steer us in this final mile towards Vision 2020, Prime Minister Najib is offering Malaysians a false hope, or worse, a big lie in the Eleventh Malaysia Plan.

Steven Sim is the MP for Bukit Mertajam. 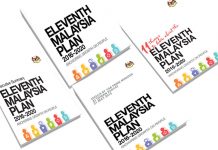