The Star should commit itself to the wider framework of freedom of expression for all citizens and of freedom of the press, asserts Mustafa K Anuar.

In today’s world that is beset by ethnic strife, religious bigotry and political conflicts and compounded by acts of terrorism and other violent forms of human atrocities, ideas and actions that are deemed “moderate” are most welcome, appreciated and treasured. Seen in this light, “moderation” is perceived as the balm for our troubled world.

The inability or, worse, refusal to appreciate difference and cultural and ethnic diversity especially in a multiethnic and multicultural setting is the very ingredient that can feed an extremist worldview, which requires a concerted challenge from those who hold “moderate” views.

Right-thinking Malaysians should have no problem in giving support to the endeavour to stem the tide of extremism in our midst. For instance, the fact that a few misled Malaysian Muslims found their way into Iraq and Syria to join the Islamic State militants in their toxic dream of establishing – via brutally violent means – an ‘Islamic Caliphate’ in that West Asian region should move them to help arrest this unhealthy and dangerous trend.

Besides, the extremist stand and action of the Islamic State forces jar with the Islamic notion of wasatiyyah, which means moderation and middle path.

This is the context in which The Star daily locates its recent corporate campaign to highlight its stable of columnists who dare to espouse “bold ideas” to buck this trend of extremism in society. A less charitable view, however, would assert that the newspaper, like many others in Malaysia experiencing plunging readership, is also jumping on Prime Minister Najib Razak’s bandwagon of The Global Movement of Moderates in its desperate attempt to stem the exodus of its readership that has migrated to online publications, among other things.

The daily’s assortment of columnists, such as Zainah Anwar, Shad Saleem Faruqi, Azmi Sharom, Zaid Ibrahim, Marina Mahathir and Karim Raslan are indeed writers in their own right, who are widely respected for their forthright views. These virtues of theirs are highlighted, nay flaunted, by the newspaper to “sell” them to readers

In its strategy to revive its readership and in turn enhance advertising revenue by ‘commodifying’ these columnists, the newspaper wittingly or otherwise makes them look like a group of people with odd ideas to be gawked at by readers.

Giving the impression that such bold ideas are confined only to these columns in the newspaper doesn’t help much in encouraging the public at large to appreciate, let alone express, moderate views.

Put another way, it appears that the freedom to express those “brave views, bold ideas” is the preserve of select columnists, which is definitely wrong. Bold ideas should also emerge in places like letters to the editor and editorials.

Besides, “caging” these bold ideas in these columns implies prescribing of the scope of freedom in writing these columns. This is to say that certain “brave views” could have been expressed more daringly had they not been spiked or edited by the daily in the past.

The newspaper should instead commit itself to the wider framework of freedom of expression for all citizens and of freedom of the press. For by doing so, the paper can attempt to provide ample space in its news reporting for the ordinary people, especially the marginalised groups, to air their views, moderate or otherwise.

It needs to be said here that certain extreme views or bigoted ideas have managed to come to centre stage partly because many of the country’s dailies chose in the past to look the other way.

Worse still, the newspapers refused to allow certain “moderate” views, which could have countered the extreme opinions, to be reported simply because these voices came from groups or individuals deemed critical of the powers that be. In this regard, the newspapers concerned had relinquished their professional duty in not only providing balanced reportage but also helping in nation-building in the widest sense of the word.

While ‘moderate’ views are to be welcomed, it should not be done at the expense of opinions deemed ‘extremist’. There is wisdom in allowing some ‘extreme’ views, particularly those that are not linked to violence, to be published alongside the ‘moderate’ ones in newspapers. For this would provide the opportunity for readers to detect the folly or soundness of the arguments presented, from which they can make their informed opinions. Here the newspapers themselves must be willing to ‘moderate’ such discourses.

To take a concrete and contemporary example, if The Star finds it appalling for the Kelantan state government to confine women’s netball matches to their own kind and away from the male gaze, then it should provide space in its news coverage for a whole gamut of views from diverse groups. It’s not enough for only the MCA or the BN to be given the space to express their gripes.

Similarly, the praise by Najib Razak for ISIL’s (now known as the Islamic State) so-called bravery in late June this year (to be emulated by Umno Baru members) should be allowed by the daily to be addressed by its diverse readers, especially those who feel that such a view is anathema to the very notion of moderation. Otherwise, silence on the part of the daily on this matter is tantamount to acquiescence to such extremism.

Another example: a newly formed coalition of over 60 civil society groups called Negara-Ku, which generally has moderate objectives as a movement, surely deserves a place in the pages of The Star. Members of the general public need to know what the coalition stands for and strives to do in the context of nation building.

To reiterate, ‘extremism’ should be tackled in the columns, the normal news reportage of newspaper and other places. In this way, you democratise the expression of moderate views.

It should also be clear to us by now that ‘moderation’” is not a trend, much less a saleable commodity. 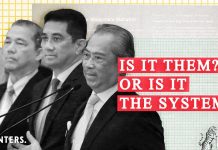 If freedom of expression includes censorship of thoughts, that is is not freedom nor a
reform. When you censor thoughts, you are invariably condoning lies. Truth does not
need censorship to prevail. Ii is only lies and half-truth that needs protection through censorship.of opposing thoughts.

No, the Malaysians that went to fight the war in the Arab world were not mislead muslims. How could they be mislead when all their lives they are brought up to believe that whatever the sunni muslims are doing to the shiite muslims in Malaysia must be correct.

… the tenants in Putrajaja are sunni muslims. All the say and do must be right, including the shiites being outlawed … As a result (some of) these ‘mislead’ sunni are going to become terrorists in Syria and Iraq or even in the Palestine and other parts of the Arab world….

It would appear then the present regime in Malaysia … not only outlawed the shiite muslims here in Malaysia, they even (go after) them …

Now the … samsengs are there to (go after) the shiite muslims for what they are brought up to believe to be the right thing to do….