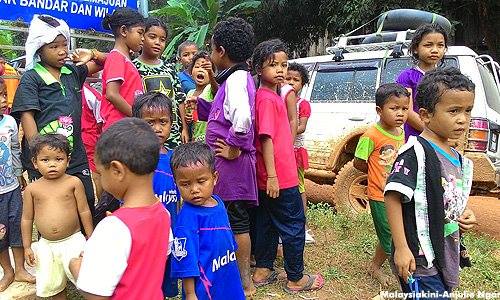 Great leaders must show compassion especially in dire times, when they are expected to put the needs of others before their own and must lead by example, says Syerleena Abdul Rashid.

The number of evacuees stood at more than 130,000 (as of 27 December) and was expected to rise in the next few days.

Many describe this flood disaster as the worst in Malaysian history with several elected leaders pressuring the government to declare a state of emergency. The general well-being of the Malaysian public was under threat and government intervention was needed to minimise or prevent such calamity from escalating further.

The average rainfall for Malaysia is approximately 2,500mm a year, according to the Malaysian Meteorology Department. This alone indicates that Malaysia receives one of the heaviest rainfalls in the world, but drastic climate changes and unpredictable weather patterns only worsen the impact of natural disasters.

Although flooding in Malaysia is a relatively common occurrence, such disasters have severe consequences on individuals and communities. Studies also indicate that natural disasters have increased both in intensity and frequency, in recent times.

The International Strategy for Disaster Reduction (under the UNEP) reported that between the years 1995 and 2005, natural disasters caused by extreme climate change affected 2.5bn people and resulted in about US$690bn (RM2.35 trillion) in economic losses.

According to the United Nations Office for Disaster Risk Reductions (UNISDR) in 2012, floods were reported to be one of the most frequent natural disasters and have affected approximately 64.5m people in the region with damages amounting to US$15.1bn (RM51.34bn).

Damage to infrastructure such as hospitals, roads, bridges, rail networks, power generators/plants and phone lines will also affect a significant proportion of the population; sometimes more so than those directly affected.

Other impacts of flooding include destruction of crops and loss of livestock. Several key industries such as fishing and agriculture will be affected through excessive rain damage, water logged soils, damage to fish farms and equipment loss, all of which could result in a drastic increase of food prices due to a momentary shortage of supplies.

Needless to say, the psychological and health impact on flood survivors can often be traumatising. The loss of loved ones and the distress caused by going through such catastrophes first hand, especially for children, will take a long time to heal.

As for survivors of flooding, the risk of contact with polluted water can bring about serious health issues such as dermatitis, ear, nose and throat infections, possible serious waterborne diseases such as vector borne diseases and other possible diseases caused by rodents, leading to casualties if left untreated.

The aftermath of such occurrences also have other worrying effects such as possible injuries or electrocutions during post-flood clean-up, disruption of health services due to insufficient access, and insufficient disaster relief aid due to a shortage of supplies or manpower.

People are aware of the damaging effects of floods and other natural disasters on society and the economy. Malaysians from all walks of life have shown fortitude, empathy and solidarity towards those affected by such tragedies.

Unfortunately, Pasir Mas MP Nik Mohamad Abduh displayed extreme tactlessness and apathy towards those who are in need of aid and rescue, by using the disaster as an excuse to bulldoze hudud.

“The flood is a reminder to all Muslims to return to Allah’s ways and stay away from His wrath. It necessitates the perseverance of the Kelantan government to implement hudud laws” is a statement Malaysians can do without. Such callousness exhibits an acute lack of compassion and is unbecoming of an elected leader.

Great leaders show compassion especially in dire times. Leaders are expected to put the needs of others before their own and must lead by example.

Present-day Malaysian society has begun to re-examine how we see our leaders. We want those who exhibit compassion, not arrogance – because positive characteristics will fare better in handling crisis in Malaysia’s ever changing economic and social climate.

There is a saying in Islam, “God does not judge you according to your bodies and appearances, but He looks into your hearts and observes your deeds”.

Malaysians should put aside all of our differences and ensure much needed help is received by those who need them the most.